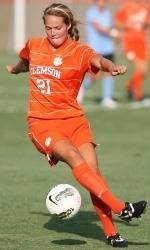 CLEMSON, SC – The Clemson women’s soccer team will play host to Northeastern on Sunday, September 4 at Historic Riggs Field. The game between the Tigers and the Huskies will begin at 12:00 PM. During pregame introductions and at halftime, the Tigers will be throwing out Clemson United scarves, which were first unveiled on Friday night during the Clemson men’s team’s victory over South Carolina. Admission is free to all home women’s soccer games.

The Tigers are 4-0 on the season after defeating Appalachian State 1-0 on Friday night in a game that spanned four hours and 42 minutes due to two lightning delays. Freshman midfielder Liska Dobberstein scored the game-winning goal for the Tigers and junior defender Heather Marik assisted on the goal.

Dobberstein’s goal against the Mountaineers moved her into second place on the team in scoring with nine points (three goals and three assists). Junior forward Lauren Arnold has earned all four wins in goal for Clemson. Arnold has nine saves and has given up just one goal in 360 minutes of play.

Northeastern has a 2-2 record on the season after falling to South Carolina on Friday night by a score of 4-0. The Huskies are led in scoring by Veronica Napoli, who has a goal and an assist for three points. Paige Burnett has 19 saves and has allowed seven goals in four games in the net for Northeastern.

The Huskies are coached by Tracey Leone, who was Clemson’s first women’s soccer coach. Leone coached the Tigers from 1994, the program’s inaugural year, to 1999. Clemson advanced to the NCAA tournament all six years with Leone at the helm of the program, and reached the NCAA Elite Eight two times during her tenure.

Clemson and Northeastern have only met one other time in women’s soccer, and that game was also played on September 4. In 2009, the Huskies defeated the Tigers by a score of 2-1 at the Georgia Nike Invitational in Athens, GA.