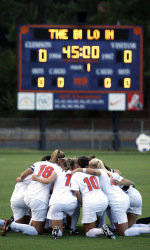 CLEMSON, SC – The Clemson women’s soccer team will play host to Miami on Friday afternoon at Historic Riggs Field. The game between the Tigers and the Hurricanes will begin at 3:00 PM and will be followed by a game between the Clemson and St. Louis men’s teams at 7:00 PM. Both games will be broadcast live on ClemsonTigers.com via TigerCast.

The Tigers are 5-5 on the season and 0-2 in Atlantic Coast Conference play. Clemson opened league play last week with losses to N.C. State (1-0) at Historic Riggs Field and Wake Forest (4-0) in Winston-Salem, NC.

Sophomore forward Jackie Dutton ranks second on the team in scoring with two goals and one assist for five points. Eight different players, including five freshmen, have scored goals for Clemson so far this season.

Freshman goalkeeper Lauren Arnold has posted 49 saves in over 881 minutes in goal for the Tigers. Arnold leads all ACC goalkeepers in saves (49) and saves per game (4.90).

Miami has a 6-3-1 overall record and an 0-1 mark in the ACC after falling to Florida State in Coral Gables last weekend by a score of 2-0. The Hurricanes are led in scoring by senior midfielder Brittney Steinbruch, who has five goals for 10 points on the season. Junior keeper Vikki Alonzo has posted 36 saves in 934 minutes in goal for Miami.

The Tigers have a 2-3-1 record in the series against the Hurricanes, which dates back to the 2004 season. Miami has won the previous two meetings in the series, a 2-0 victory in Coral Gables in 2009 and a 1-0 win at Historic Riggs Field in 2008.