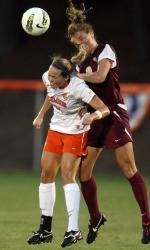 CLEMSON, SC – The Clemson women’s soccer team will play host to fourth-ranked Duke on Sunday afternoon at Historic Riggs Field. The game will be the second of four consecutive home games for the Tigers, and all four are against teams ranked 13th or better in the most recent national poll. Sunday’s game will begin at 2:00 PM and will be broadcast live on ClemsonTigers.com via TigerCast. Clemson United t-shirts and scarves will be thrown out to the crowd during halftime.

Clemson has a 5-4 overall record and a 0-2 ledger in ACC play, most recently falling to #10 Florida State by a score of 6-2 on Thursday night at Historic Riggs Field. Junior forward Maddy Elder has 17 points (six goals, five assists) to lead the team in scoring. Elder has scored the game-winning goal in three of the Tigers’ five wins this season.

Lauren Arnold has played 750 minutes in goal for the Tigers, and has recorded 19 saves, given up 12 goals and posted three solo shutouts on the year.

The Blue Devils are 10-1 overall and 2-0 in league contests after defeating Miami by a score of 3-0 in Durham, NC on Thursday. Freshman forward Kelly Cobb leads Duke in scoring with eight goals and six assists for 22 points. Junior keeper Tara Campbell has tallied 32 saves and given up five goals in 931 minutes in goal for the Blue Devils.

The Tigers have an 11-9 record all-time in the series against Duke, which began in 1994, the inaugural year of the Clemson program. The Blue Devils have won the last three meetings between the two teams, including a 4-1 victory in Durham in 2010, when Duke was ranked 22nd nationally. Heather Marik scored the Tigers’ lone goal in that contest.