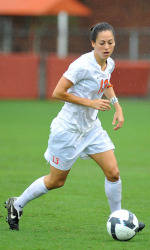 CLEMSON, SC – The Clemson women’s soccer team will play host to ninth-ranked Wake Forest on Sunday, October 4 at Historic Riggs Field. The 2:00 PM contest between the Tigers and the Demon Deacons will be the first Atlantic Coast Conference home game for Clemson.

The Tigers are 3-8 (0-3 ACC) on the season after falling to N.C. State on Thursday night in Raleigh, NC by a score of 2-1. Maddy Elder is Clemson’s leader in scoring, with nine goals and one assist for 19 points on the season. The freshman forward also ranks among the league leaders in several scoring categories. She is tied for second in the conference in goals (9), third in goals per game (0.82), fourth in points (19) and fifth in points per game (1.73.)

Senior forward Lily Boleyn and sophomore forward Tara Cort are tied for second on the Tiger team in scoring with four points apiece. Boleyn has one goal and two assists and Cort has two goals on the season. Junior Paula Pritzen has recorded 42 saves in 1,019 minutes in goal for Clemson.

Wake Forest is 8-2-1 overall and 0-1-1 in the ACC. The Demon Deacons played to a double-overtime scoreless tie with Duke on Thursday evening in Winston-Salem, NC. Seniors Jill Hutchinson and Kaley Fountain lead the Demon Deacons with 18 and 16 points, respectively. Senior Laura Morse has posted 19 saves in nearly 740 minutes in goal for Wake Forest.

Clemson leads the series against Wake Forest with a 12-4-3 record all-time, however the Demon Deacons have won the last two contests between the two teams. Last season, then 15th-ranked Wake Forest defeated the Tigers 2-0 in Winston-Salem, NC.