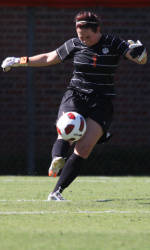 CLEMSON, SC – The Clemson women’s soccer team will return to Historic Riggs Field on Thursday, October 21 following a streak of four road games, all against teams ranked in the top-20 nationally. The Tigers will play host to defending national champion and currently third-ranked North Carolina in a contest scheduled to begin at 7:00 PM. The game will be broadcast live on ClemsonTigers.com via TigerCast.

On Sunday, October 24, the Tigers will travel to Florence, SC to face Francis Marion in their final road game of the 2010 season. The game against the Patriots will begin at 3:00 PM at FMU Soccer Field.

Clemson is 5-10 overall (0-7 ACC), most recently falling to #4 Maryland and #6 Boston College on the road last week. Sophomore forward Jackie Dutton (Bridgeport, OH) is second on the team in scoring with five points recorded on two goals and one assist.

In over 1196 minutes in goal for the Tigers, freshman keeper Lauren Arnold has recorded 72 saves. The native of Hoover, AL currently leads all Atlantic Coast Conference goalkeepers in saves (72) and saves per game (5.14).

North Carolina, ranked third in the nation in the most recent NSCAA poll, has a 13-1-1 overall record and is 5-1 in ACC play. Freshman forward Kealia Ohai leads the Tar Heels in scoring with nine goals and three assists for 21 points. Sophomore Hannah Daly and freshman Anna Sieloff have posted seven and 28 saves, respectively, while splitting time in goal for North Carolina.

The Tigers are 1-23 in the series against the Tar Heels, which dates back to the 1994 season. Then-sixth-ranked North Carolina won last year’s meeting by a score of 3-0 in Chapel Hill, NC, and the most recent meeting between the two teams at Historic Riggs Field was a 5-2 victory for the then-#3 Tar Heels in 2008.

Francis Marion has a 3-12-2 overall record in 2010. The Patriots are led in scoring by junior forward Kiley Williams with 12 points (three goals, six assists). Junior keepers Casey Durham and Lauren Vetock have tallied 55 and 54 saves in goal, respectively.

Clemson has a 2-0 all-time record against Francis Marion. The last time the two teams met at Historic Riggs Field, also the first meeting in the series, was a 4-0 Tiger victory in 2006. Clemson also won a 3-0 decision over the Patriots at the Carolina’s Cup in Columbia, SC in 2008.