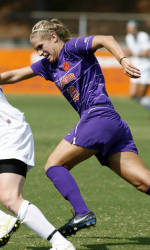 CLEMSON, SC – The Clemson women’s soccer team will play host to 11th-ranked Maryland on Thursday at 7:00 PM and fifth-ranked Boston College on Sunday at 1:00 PM this week. Both games will be broadcast live on ClemsonTigers.com via TigerCast. At halftime, Clemson United t-shirts and scarves will be thrown out to the crowd at Historic Riggs Field.

The Tigers have a 5-5 overall record (0-3 ACC) so far in 2011. Last week, the Tigers fell to #10 Florida State (6-2) and #4 Duke (2-0) at home at Historic Riggs Field. Junior forward Maddy Elder has six goals and five assists for 17 points to lead the team in scoring. Freshman forward Liska Dobberstein ranks second on the team in scoring with five goals and four assists for 14 points on the season.

Two sophomore keepers have combined to play 930 minutes in goal for the Tigers so far this season. Lauren Arnold has recorded 19 saves and given up 12 goals, and Morgan Hert has posted seven saves and given up six goals through 10 games.

Maryland has a 7-2-3 overall record and is 1-2-1 in conference play after falling in overtime to Boston College (2-1) and tying NC State (0-0) in College Park, MD last week. The Terrapins are led in scoring by Olivia Wagner, with six goals and two assists for 14 points. Yewande Balogun has tallied 39 saves and given up eight goals in 1108 minutes in goal for Maryland.

The Tigers have an 8-12-1 all-time record against the Terrapins, who have won the last three games in the series. The last meeting between the two teams was a 4-0 victory for then-sixth-ranked Maryland on October 14, 2010 in College Park, MD.

Boston College remains undefeated at 8-0-2 overall, and has a 3-0 record in ACC contests, most recently defeating Maryland (2-1) and Virginia Tech (2-1), both on the road and in overtime last week. Kristen Mewis leads Boston College in scoring with 15 points on six goals and three assists. Keeper Jillian Mastroianni has recorded 40 saves and given up just three goals in 964 minutes in the net for the Eagles.

Boston College leads the series with a 5-1-1 record against the Tigers all time. Last year, the then 11th-ranked Eagles defeated Clemson by a score of 3-1 in Newton, MA.