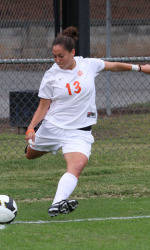 CLEMSON, SC – The Clemson women’s soccer team will travel to Athens, GA this weekend to play two games in the Georgia Nike Invitational. The Tigers will face Northeastern on Friday, September 4 at 4:30 PM and will take on Florida Atlantic on Sunday, September 6 at 11:00 AM at UGA Soccer Stadium.

The Tigers are 1-1 on the young season, having defeated Wofford 4-0 in Clemson and fallen to UAB 3-2 in double overtime in Birmingham, AL. Freshman forward Molly Franklin and freshman midfielder Callie Cavanaugh have scored one goal apiece on the season. Junior Paula Pritzen has recorded seven saves in two games in goal for the Tigers.

Northeastern has a 2-0 record so far this season, with wins over Longwood (3-0) and Cincinnati (2-0). Freshman forward Devin Petta leads the Huskies with two goals and two assists for six points. Sophomore goalkeeper Stephanie Gordon has posted 10 saves and has not allowed a goal in two games. Clemson and Northeastern have never met on the soccer field.

Florida Atlantic is 1-2 for the 2009 campaign, after falling to Stetson (2-0) and USF (1-0) and defeating Ball State (3-0). The Owls will face Georgia on Friday night in Athens before meeting the Tigers on Sunday. Red-shirt senior forward Ashley Mannarino is FAU’s leading scorer, with two goals and one assist on the season. Sunday’s game will be the first meeting in the series between the Tigers and the Owls.