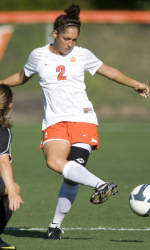 CLEMSON, SC – The Tiger women’s soccer team will travel to Coral Gables, FL on Friday to face Miami. The game between Clemson and the Hurricanes will kick off at 7:30 PM at Cobb Stadium.

Clemson is 3-9 (0-4 ACC) on the season, most recently falling to ninth-ranked Wake Forest by a score of 3-0 at Historic Riggs Field. Freshman forward Maddy Elder leads the Tigers in scoring with nine goals and one assist for 19 points. The Roanoke, VA native ranks third in the Atlantic Coast Conference in goals (9) and goals per game (0.75).

Senior forward Lily Boleyn and sophomore forward Tara Cort are tied for second on the Clemson roster in scoring with four points apiece. Boleyn has one goal and two assists and Cort has two goals on the season. Junior Paula Pritzen has recorded 45 saves in 1,064 minutes in goal for the Tigers.

Miami has a 6-6 overall record and a 1-2 mark in conference play. The Hurricanes most recently dropped a 4-1 decision to fifth-ranked Florida State on Sunday in Tallahassee, FL. Freshman Kate Howarth and junior Brittney Steinbruch are tied for the team lead in scoring with six points apiece. Sophomore Vikki Alonzo has posted 50 saves in 1,040 minutes in goal for Miami.

The series between the Tigers and Hurricanes is tied at 2-2-1. Miami won the most recent meeting between the two teams, a 1-0 decision at Historic Riggs Field in 2008. Clemson has a 1-0-1 all-time record in contests played at Cobb Stadium.