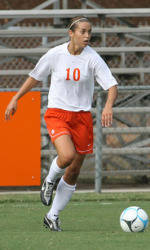 CLEMSON, SC – The Clemson women’s soccer team will face Charlotte in the first round of the 2007 NCAA Women’s Soccer Tournament on Friday in Knoxville, TN. The game between the Lady Tigers and the 49ers will begin at 8:00 p.m. at Regal Soccer Stadium on the campus of first and second-round host Tennessee.

The Lady Tigers have a 9-5-5 overall record and are ranked 24th in the RPI ratings released through the games of November 5. Clemson is ranked 28th nationally according to Soccer Buzz and received votes in the final regular season poll released by the NSCAA on November 6.

Three Lady Tigers are tied for the team lead in scoring with 13 points apiece. Senior Nuria Zufia has six goals and one assist, freshman Samantha Fortier has five goals and three assists and sophomore Molly Franklin has two goals and nine assists. Senior All-American goalkeeper Ashley Phillips has 77 saves and has given up just 16 goals in 18 games on the season.

Clemson received its 14th consecutive bid to the NCAA Tournament on Monday and has been invited to the postseason tournament every year since the program’s inception in 1994. The Lady Tigers have advanced to the NCAA Sweet 16 six times and the Elite Eight four times in program history.

In 2006, Clemson achieved an NCAA soccer first by becoming the first team in history to advance three consecutive games in tournament play by winning penalty kicks. The team tied Vanderbilt, Oklahoma State and Stanford in regulation and two overtime periods and advanced by winning the penalty kick round in all three contests. Clemson reached the NCAA Elite Eight last season before falling to Florida State 2-1 in Tallahassee.

Charlotte has a 16-4-1 overall record and won the Atlantic 10 Conference Tournament title last week with wins over Richmond and Fordham. The 49ers are led in scoring by Lindsey Ozimek with five goals and 12 assists for 22 points. Goalkeeper Lauren Brown has 75 saves and has given up 13 goals in Charlotte’s 21 games on the season.