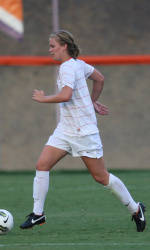 CLEMSON, SC – The Clemson women’s soccer team will travel to Boone, NC on Friday to face Appalachian State. The game between the Tigers and Mountaineers will kick off at 7:00 PM at ASU Soccer Stadium.

Clemson is 3-0 on the season, most recently defeating Presbyterian College by a score of 8-0 in Clinton, SC on Sunday, August 28. Junior Maddy Elder and sophomore Deana Sherry led the Tigers against the Blue Hose, scoring two goals each in the contest.

Elder leads the team in scoring on the season as well, with four goals and two assist for 10 points through three games. Sophomore Lauren Arnold has played all 270 minutes in goal for the Tigers. She has posted seven saves and given up just one goal in the three games combined.

Appalachian State has a 1-2 record so far in 2011 after earning their first victory with a 2-1 defeat of VCU on Sunday, August 28. Two Mountaineers, Julia Holz and Callie Johnson, have recorded one goal apiece to lead the team in scoring on the young season. Amy Kolowsky has recorded 17 saves and given up four goals in 270 minutes in the net for Appalachian State.

The Tigers and Mountaineers have only met one time in women’s soccer. That game was a 9-0 victory for Clemson on October 20, 1995 at Historic Riggs Field.