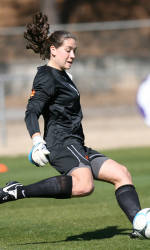 Clemson will conclude the 2010 season on Sunday, October 31 as it plays host to sixth-ranked Virginia. The Tigers will honor two seniors prior to their final game at Historic Riggs Field against the Cavaliers at 1:00 PM. The game will be broadcast live on ClemsonTigers.com via TigerCast.

Sunday will be the final game at Historic Riggs Field for Tiger seniors Marci Elpers and Samantha Fortier. Fortier, a forward from Wilbraham, MA, is a veteran of 57 games in a Tiger uniform. She has six goals and eight assists for her career, including a goal scored in front of her hometown crowd earlier this year when the Tigers faced #6 Boston College in Chestnut Hill, MA. Elpers, a native of Kingsport, TN, has played a role as a backup goalkeeper for three seasons, seeing action in six games and recording 12 saves for her career.

The Tigers have a 6-12 overall record (0-9 ACC), most recently falling to Virginia Tech in an ACC contest on Thursday. Clemson is led in scoring by sophomore forward Jackie Dutton is third on the team in scoring with two goals and two assists for six points.

Freshman keeper Lauren Arnold has posted 80 saves in over 1331 minutes in goal for the Tigers. Arnold’s 80 saves and 5.00 saves per game average place her at the top of the ACC in both statistical categories.

Virginia, currently ranked 6th in the nation by the NSCAA, is 12-3-2 overall and 6-2-1 in the ACC. The Cavaliers defeated N.C. State on Thursday in Charlottesville, VA by a score of 2-1. Senior forward Meghan Lenczyk has 12 goals and five assists for 29 points on the season to rank first on the team in scoring. Junior Chantel Jones has 45 saves and has given up just 11 goals in 1571 minutes in the net for the Cavaliers.

The Tigers have a 10-9-1 overall advantage in the series against Virginia, however the Cavaliers have won the last two contests between the teams. Virginia won 7-1 in Clemson in 2008 and 3-0 in Charlottesville in 2009.