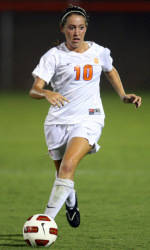 CLEMSON, SC – The Clemson women’s soccer team will face two top-25 opponents on the road this week as it travels to #12 Florida State on Thursday and #22 Duke on Sunday. The Tigers will face the Seminoles at 7:00 PM on Thursday at the Seminole Soccer Complex and will meet the Blue Devils at 2:00 PM on Sunday at Koskinen Stadium. Thursday’s game against Florida State will be televised on FOX Sports Florida.

Clemson has a 5-6 overall record and a 0-3 mark in ACC play. The Tigers fell to Miami by a score of 3-0 at Historic Riggs Field in their most recent action on Friday, October 1.

Lauren Arnold has posted 56 saves in 971 minutes in goal for the Tigers. The freshman keeper leads all Atlantic Coast Conference goalkeepers in saves (56) and saves per game (5.09).

The 12th-ranked Seminoles are 9-2 overall and 3-0 in the ACC, most recently defeating Duke by a score of 3-1 in Tallahassee, FL. Junior midfielder Tori Huster leads Florida State in scoring with five goals and four assists for 14 points. Redshirt freshman Kelsey Wys has 52 saves in 1000 minutes in goal for the Seminoles.

Clemson has a 7-11-2 record in the series against Florida State, which began in 1995. The Seminoles have won four consecutive games in the series, including a 5-1 victory at Historic Riggs Field in 2009.

Duke, currently ranked 22nd by the NSCAA, is 6-3-3 on the season, and has a 0-2-1 ledger in league play. The Blue Devils are led in scoring by freshman forward Laura Weinburg with 11 points on the season (five goals, one assist.) Sophomore keeper Tara Campbell has 41 saves in 1048 minutes in goal for Duke.