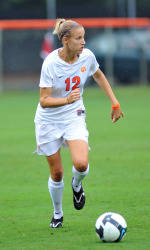 CLEMSON, SC – The Clemson women’s soccer team will face 11th-ranked Virginia on Sunday afternoon in Charlottesville, VA. The game is scheduled to begin at 2:00 PM at Klockner Stadium on the Cavaliers’ campus.

Clemson has a 3-6 record overall and a 0-1 mark in league play, most recently falling to Virginia Tech by a score of 2-1 in overtime on Thursday night in Blacksburg, VA. The Tigers are led in scoring by freshman forward Maddy Elder, who has nine goals and one assist for 19 points. Elder is tied for the Atlantic Coast Conference lead in two scoring categories – goals (9) and goals per game (1.00.)

Sophomore forward Tara Cort and senior forward Lily Boleyn are tied for second on the team in scoring with four points apiece. Junior Paula Pritzen has tallied 36 saves in 839 minutes in goal for the Tigers.

Virginia is 5-2-2 overall and 0-1 in the ACC. On Thursday night, the Cavaliers dropped a 2-1 decision to N.C. State in Raleigh, NC. Junior forward Meghan Lenczyk leads the team in scoring with six goals and two assists for 14 points. Sophomore Chantel Jones has recorded 21 saves and given up just six goals in nine games in goal for the Cavaliers.

Clemson leads the series with a 10-8-1 overall record against Virginia, however the Cavaliers have a 4-3-1 advantage all-time in games contested in Charlottesville. In 2008, then 10th-ranked Virginia defeated the Tigers by a score of 7-1 at Clemson’s Historic Riggs Field.