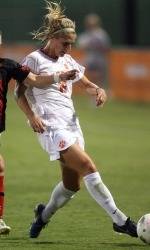 CLEMSON, SC – The Clemson women’s soccer team will travel to Chapel Hill, NC to face 10th-ranked North Carolina at Fetzer Field on Thursday, October 6. The game between the Tigers and the Tar Heels will begin at 8:00 PM and will be televised on Fox Sports South.

The game against the Tar Heels will be Clemson’s fifth consecutive game against an opponent ranked 11th or better in the nation. Prior to Thursday’s game, the Tigers played four straight home games, against #10 Florida State, #4 Duke, #11 Maryland and #5 Boston College. The Tigers have a 5-7 overall record and a 0-5 mark in Atlantic Coast Conference play, most recently falling to the 11th-ranked Terrapins 2-1 and the fifth-ranked Eagles 4-0 last Thursday and Sunday, respectively.

Junior forward Maddy Elder and freshman forward Liska Dobberstein rank first and second on the Clemson team in scoring so far in 2011. Elder has recorded six goals and five assists for 17 points on the season, while Dobberstein has tallied six goals and four assists for 16 points. Sophomore midfielder Vanessa Laxgang is third on the team in scoring with nine points (four goals and one assist).

Two sophomore keepers have combined to play over 1,110 minutes in goal for the Tigers so far this season. Lauren Arnold has posted 20 saves and Morgan Hert has tallied 17 through 12 games. Hert recorded a career-best nine saves in the Tigers’ last outing, against Boston College on Sunday, October 2.

North Carolina is 8-2 overall and 3-1 in the ACC following wins on the road over #10 Florida State (2-0) and Miami (4-1) last week. The Tar Heels are led in scoring by Courtney Jones, who has three goals and six assists for 12 points on the season. Three goalkeepers, Adelaide Gay, Anna Sieloff and Hannah Daly, have combined for 37 saves and given up just 10 goals in 920 minutes in goal on the year.

The Tar Heels have a 24-1 record all-time against the Tigers. Clemson’s one win in the series was a 2-1 victory at Historic Riggs Field on September 13, 2000. The Tigers went on to win the ACC regular season title and reach the quarterfinal round of the NCAA tournament that year. Last year’s contest between the two teams was a 5-1 victory for then-third-ranked North Carolina on October 21, 2010 in Clemson, SC. The last meeting between the two teams at Fetzer Field was a 3-1 win for the then-sixth-ranked Tar Heels on October 29, 2009.