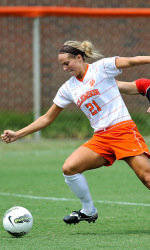 CLEMSON, SC – The Clemson women’s soccer team defeated Northeastern by a score of 2-1 on Sunday afternoon at Historic Riggs Field. Junior Maddy Elder scored both Clemson goals in the win, which improved the Tigers’ record to 5-0 on the season. The Huskies fell to 2-3 with the loss.

“This was a good win for us,” said Head Coach Eddie Radwanski. “We knew that it was not going to be an easy game. Northeastern is a very good team and Tracey (Leone) is a wonderful coach. I was encouraged that we created several opportunities at the beginning of both halves. If I am being constructively critical, we have been guilty of leaving too many chances. The positive aspect of that is that we are creating those chances to begin with.

“I am pleased to be undefeated at this stage. It is good for our team mentality. We have two big games next week. South Carolina is a very good team, and is going to present a challenge for us, but we need to have those challenges in order to see where we are and what our strengths and weaknesses are heading into the ACC season.”

Junior forward Maddy Elder put the Tigers on the board at the 13:57 mark. Following a Northeastern foul, freshman defender Stacey Huddleston sent a free kick from the right side to Elder, who was waiting inside the box on the left side. Elder headed the ball into the net for her fifth goal of the season.

Northeastern evened the score less than two minutes later at the 15:53 mark. Senior defender Kelly Matthews sent a long pass up the field to senior forward Veronica Napoli. Napoli put the ball into the left side of the goal from close range.

Elder gave Clemson the 2-1 lead in the 67th minute after a foul inside the box by a Northeastern defender led to a penalty kick. Elder’s shot went into the right side of the net on the ground past the Huskies’ diving goalkeeper for her second goal of the day.

The Tigers will play host to the Carolina’s Cup tournament on Friday, September 9 and Sunday, September 11 at Historic Riggs Field. On Friday, Clemson will face South Carolina at 7:30 PM and on Sunday the Tigers will face Furman at 2:30 PM. In other Carolina’s Cup action, Furman and UNC Wilmington will square off on Friday at 5:00 PM and UNC Wilmington and South Carolina will meet on Sunday at 12:00 PM, also at Historic Riggs Field. Admission is free to all home Clemson women’s soccer matches.