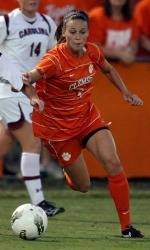 CLEMSON, SC – The Clemson women’s soccer team fell to South Carolina by a score of 2-0 in the Carolina’s Cup tournament on Friday night at Historic Riggs Field. The loss was the first of the year for the Tigers, and brought their record to 5-1 on the season. The Gamecocks improved to 4-2 with the win.

“I certainly cannot fault our girls for not competing,” said Head Coach Eddie Radwanski. “We came out with tremendous energy and passion tonight. As a coach, if you can walk off the field at the end of the game with your head held high, there’s not much more that you can ask for. I feel for the girls because they put forth a lot of effort and would have liked to take something away, but South Carolina is a good team.

“The crowd was great. The team fed off of their energy and rose to the occasion. We talked about playing to our strengths and I feel that we did that tonight. We were dangerous at times. The opportunity to take the game was there, but the margin of error is small in this game.”

The Tigers’ best scoring chance in the first half came in the 39th minute, when freshman defender Stacey Huddleston sent a corner kick into the box from the right side. Junior midfielder Heather Marik headed a shot toward the net, but it went right into the hands of Gamecock keeper Sabrina D’Angelo.

South Carolina scored at the 39:35 mark when Danielle Au launched a long shot into the net from the right side following a throw-in by Dani Henry. The Gamecocks scored again in the 68th minute when Gabrielle Gilbert put the ball in the net from close range on a double-assist by Lolly Holland and Ali Whitney.

Clemson had another scoring opportunity with less than five minutes to go in the game off another Huddleston corner kick, but freshman forward Liska Dobberstein was unable to connect on a header shot and the loose ball was cleared by the Gamecocks.

Statistically, the Tigers took nine shots and had seven corner kick opportunities for the game, while the Gamecocks had five shots and three corner kicks. D’Angelo recorded one save in goal for South Carolina.

Clemson will play host to Furman on Sunday, September 11 in Day Two of the Carolina’s Cup tournament. The Tigers will face the Paladins at 2:30 PM at Historic Riggs Field. The match will be broadcast live on ClemsonTigers.com via TigerCast and admission is free to all home Clemson women’s soccer matches.