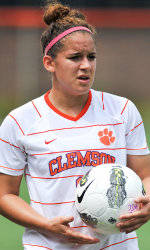 CLEMSON, SC – The Clemson women’s soccer team lost in heartbreaking fashion in double overtime by a score of 3-2 to Furman in the final game of the Carolina’s Cup tournament on Sunday afternoon at Historic Riggs Field. With the loss, the Tigers fall to 5-2 on the season, while the Paladins improve to 4-3 with the win.

The Tigers got on the board first when sophomore midfielder Vanessa Laxgang netted her fourth goal of the season at the 13:48 mark. Junior midfielder Rachel Hurd sent a cross from the far right to Laxgang on the left side. Laxgang beat her Furman defender and put the ball in the net with a shot on the ground from eight yards out on the left side.

The Paladins evened the score in the 32nd minute after a Furman shot deflected off the hands of Clemson keeper Lauren Arnold in a one-on-one.

Freshman midfielder Liska Dobberstein tied the game with less than five minutes to go in regulation when she launched the ball into the right side of the net from 10 yards. The goal was Dobberstein’s fourth of the season, and sent the game into overtime.

Neither team scored in the first overtime period or for the first nine minutes of the second overtime period. With less than a minute to go, a foul was called on the Tigers, which gave the Paladins a free kick from the left side. India Robinson handled the free kick and crossed it to Ali Simpson for the Furman goal at the 109:25 mark.

For the game, Clemson took 21 shots to Furman’s seven, and the Tigers had eight corner kicks to the Paladins two. There were 15 fouls called on Clemson and nine whistled on Furman in the game. Furman keeper Jessica Smith recorded six saves in goal. Laxgang and freshman defender Stacey Huddleston were named to the Carolina’s Cup All-Tournament Team for the Tigers.

“It was nice to see that the team did not give up and kept fighting the entire game,” said junior co-captain Heather Marik. “Friday’s game against South Carolina was a very emotional one for us and it was tough to bounce back from. Unfortunately things did not go our way today, but we will learn from this and move on. We will come out ready to play and fight hard against Miami on Thursday.”

Clemson will play its first Atlantic Coast Conference match of the 2011 season on the road against Miami on Thursday, September 15. The game between the Tigers and the Hurricanes will begin at 7:00 PM at Cobb Stadium in Coral Gables, FL.