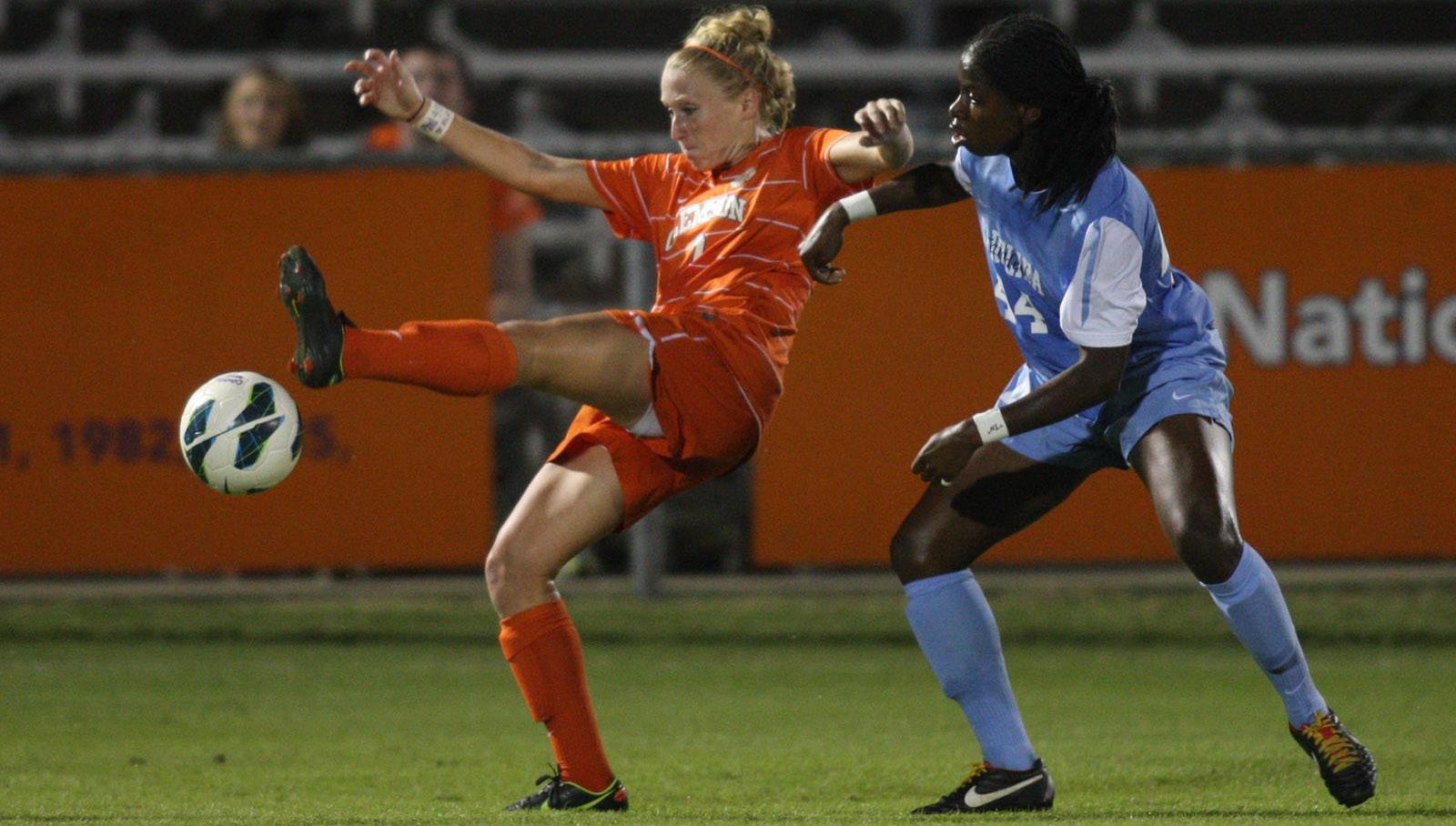 CLEMSON, SC – The Clemson women’s soccer team fell to seventh-ranked North Carolina 4-0 on Friday night at Historic Riggs Field.  With the loss, the Tigers dropped to 5-9-2 overall (0-8 ACC), while the Tar Heels improved to 8-3-2 overall (4-2-1 ACC) with the win.

Hanna Gardner put the Tar Heels on the board in the 21st minute and Amber Brooks gave North Carolina a 2-0 lead with an impressive shot on a 22-yard free kick in the 37th minute.  Maria Lubrano scored the two second-half goals for the Tar Heels in a one minute span from 79:16 to 81:06.

The Tigers created a couple of good scoring chances in the game, but were unable to capitalize.  In the 14th minute in the first half, Clemson drew a corner kick, which was handled by sophomore midfielder Katelyn Reeve.  Reeve sent the ball outside of the box to freshman midfielder Jenna Polonsky, who took a 25-yard shot that missed just wide of the goal.

In the second half, junior forward Tabitha Padgett took a close-range shot at 86:30 that was saved by Tar Heel goalkeeper Adelaide Gay.  Less than two minutes later at the 87:52 mark, Clemson senior midfielder Maddy Elder sent a corner kick into the box to Padgett.  The ball appeared to go into the back of the net off of Padgett’s hip, however a foul whistled against the Tigers on the play nullified the goal.

In her first start of the season, junior goalkeeper Morgan Hert tallied five saves for the Tigers, while Gay posted one save for the Tar Heels.  For the game, Clemson took four shots and had three corner kicks, compared to North Carolina’s 18 and six, respectively.  There were nine fouls called on the Tar Heels and six on the Tigers in the contest.

“I was pleased with the effort tonight and with our ability to compete and battle,” said Head Coach Eddie Radwanski.  “In talking to [North Carolina Head Coach] Anson [Dorrance] after the game, he noted that this was not a 4-0 game.  I agree; the score was not indicative of the game.  That being said, you have to give North Carolina credit, they are a very good team.  The goal by Brooks on the free kick before the half was an incredible shot.

“For the majority of the second half, we did a fantastic job.  We got caught on one mistake, and UNC punished us for it.  A good team like that is not going to sit back.  If you make a mistake, they are going to pounce on it.  Still, going into the game, we wanted our girls to compete, and as a collective effort, I feel that we did compete tonight.”

Clemson will return to Historic Riggs Field for two games next week, beginning with a Thursday night contest against #19 Virginia Tech.  On Sunday, October 21, the Tigers will honor their senior class prior to a 1:00 PM game against NC State.