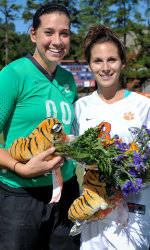 CLEMSON, SC – The Clemson women’s soccer team fell to sixth-ranked Virginia on Sunday afternoon at Historic Riggs Field by a score of 6-0. With the loss, the Tigers conclude the season with a 6-13 overall record (0-10 ACC). The Cavaliers improve to 13-3-2 overall (7-2-1 ACC) with the win.

The Tigers honored seniors Samantha Fortier and Marci Elpers prior to their final game at Historic Riggs Field on Sunday. Fortier concluded her career as a veteran of 58 games in a Tiger uniform, and recorded six goals and eight assists for 20 points in her career. During her freshman season in 2007, the Wilbraham, MA native ranked in a tie for third on the team in scoring with 13 points. That year, the Tigers advanced to the second round of the NCAA Tournament. Fortier suffered an ACL injury during the 2010 spring season and played in her first game this season on October 1. She scored her first goal of the 2010 season in front of her hometown crowd when the Tigers played at Boston College earlier this year.

Elpers played a role as a backup goalkeeper for three seasons, seeing action in seven games and recording 13 saves for her career. While Elpers’ on field time may not have been a lot, her significance and impact on the program has been incredible. The native of Kingsport, TN won the Coaches’ Award the past three seasons acknowledging her hard work, dedication and commitment to the team on and off the playing field. At last night’s banquet, the Coaches’ Award was actually re-named “The Elper” in her honor.

Virginia scored three goals in a span of less than three minutes in the first half of the game. Senior midfielder Sinead Farrelly netted the first two, and sophomore forward Erica Hollenberg scored the third between 13:59 and 16:42 on the clock. The Cavaliers scored three times in the second half as well, on goals by Shasta Fisher, Gloria Douglas and Katie Starsia.

For the game, Clemson took five shots and had one corner kick, compared to Virginia’s 30 shots and nine corner kicks. Freshman Marci Elpers tallied one for the Tigers, while Chantel Jones recorded two saves in the net for the Cavaliers.

“The focus today was on the last home game for our two seniors Samantha Fortier and Marci Elpers,” said Head Coach Hershey Strosberg. “It was great to have them both on the field at the end of the game and for them to be able to walk off the field knowing everything that they have put into this program. Now they will belong to an even bigger group, Clemson women’s soccer alumni, which is a very special tradition here.

“We wanted to send the seniors off with a great final game, but today we saw the effects of a top-10 Virginia team in preparation for the ACC Tournament. That is a barometer for us in terms of something that we want to achieve. It’s a standard that we have to be able to work at during the off season.

“I am proud of what we have achieved this year. Despite the challenges and some injuries which we had no control over, we have a very strong sense of team. Now it’s time for us to assess as a team and as individuals, and determine what we need to work on in the off season.”