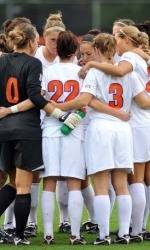 Casey Nogueira scored North Carolina’s first goal in the 12th minute and the Tar Heels maintained the 1-0 lead through halftime. North Carolina scored two more times in the second half, in the 52nd and 54th minutes, on goals by Jessica McDonald and Nogeuira.

“I’m proud of the way the team competed together,” said Head Coach Hershey Strosberg. “North Carolina is known for its relentless pressure and we tried to play when we could and did some good things at times. We played as well as we could tonight.”