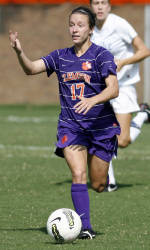 CLEMSON, SC – The Clemson women’s soccer team dropped a 4-0 decision to #3 Wake Forest on Sunday afternoon at Historic Riggs Field. The game against the third-ranked Demon Deacons was the seventh against a team ranked 11th or better in the national rankings for the Tigers in the last nine games. The loss brings Clemson’s record to 5-12 overall (0-10 ACC), while Wake Forest improves to 12-2-3 overall (5-1-3 ACC) with the win.

“We played a pretty good first half. We competed well and we played with a tactical game plan,” said Head Coach Eddie Radwanski. “The difference in the second half was that they wore us down. You have to give credit to Wake Forest. They are one of the better teams in this conference.

“There are areas of the game where we simply need to get better. We can take away a positive from our play in the first half, and there is a lot for us to work on from the second half. Ultimately, we were beaten by a better team in the second half of this game today.”

The two teams played a scoreless, evenly-contested first half of play, in which Wake Forest took six shots and the Tigers took two. The Demon Deacons scored 11 minutes into the second half, at the 56:42 mark, when India Winford crossed the ball from the right to Rachel Nuzzolese, who scored her seventh goal of the year from close range. Nuzzolese scored her second goal of the day in the 69th minute and Amanda Howell gave Wake Forest a 3-0 lead in the 75th minute of play. Kristen Meier scored the Demon Deacons final goal at the 80:04 mark.

The Demon Deacons took 18 shots in the game compared to the Tigers’ two, and had nine corner kicks to Clemson’s two. There were seven fouls called on each team in the game. Sophomore keeper Lauren Arnold posted three saves in the net for the Tigers and Aubrey Bledsoe recorded one for the Demon Deacons.

The Tigers will play their final game of the 2011 season on Thursday, October 27 at 7:00 PM as they play host to Francis Marion. The game will be Senior Day for Clemson’s three seniors, Ashlynne Bass, Rachel Hurd and Sarah Jacobs, who will be honored prior to the game.