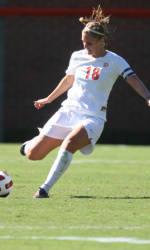 CLEMSON, SC – The Clemson women’s soccer team fell to third-ranked North Carolina by a score of 5-1 on Thursday night at Historic Riggs Field. With the loss, the Tigers fall to 5-11 overall (0-8 ACC), while the defending national champion Tar Heels improve to 14-1-1 overall (6-1 ACC).

The Tar Heels scored two goals early in the first half and then scored twice early in the second half. Kealia Ohai netted two goals and tallied one assist. Amber Brooks, Courtney Jones and Olivia Mbala scored the other North Carolina goals in the contest.

The Tigers put their lone goal on the board at the 88:14 mark. Senior forward Samantha Fortier sent a corner kick into the box from the far side of the field. Sophomore Heather Marik fielded the corner kick 12 yards in front of the net and sent it into the goal to the left of the diving Tar Heel keeper.

For the game, Clemson took four shots and had four corner kicks, while North Carolina took 26 shots and had eight corner kicks. Freshman Lauren Arnold recorded six saves in goal in the first half of the game for the Tigers and freshman Morgan Hert tallied four saves in the second half. Hannah Daly earned the win in goal for the Tar Heels, recording one save in the effort.

“I’m proud that the kids didn’t stop competing,” said Head Coach Hershey Strosberg. “All the way into the 89th minute, we earned a corner kick, put the ball in the box and Heather Marik would not be denied. The effort was good tonight. But there is competing, and then there is having an impact on the game. We did not have enough players making an impact on the game tonight.

“We need to work on having the same level of energy and commitment at the beginning of the game and at the start of the second half as we did at the end of the game tonight. We have a lot of young kids on this team that are realizing what playing at this level really means.”

The Tigers will return to action on Sunday, October 24 as they travel to Florence, SC to face Francis Marion. The game between Clemson and the Patriots is set to begin at 3:00 PM at FMU Soccer Field.