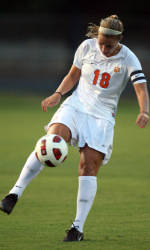 Duke scored twice in the first half, on goals by Laura Weinburg and Kim DeCesare in the 23rd and 39th minutes, respectively. The Tigers put a goal on the board at the 64:46 mark in the second half. Sophomore defender Emily Tatum took the free kick for Clemson following a Duke foul. Tatum sent the ball in the air to sophomore defender Heather Marik, who headed it into the goal for her first score of the season. The assist was the first of the season for Tatum. Mollie Pathman put the Blue Devils’ third and fourth goals in the net in the 77th and 84th minutes to give Duke the 4-1 victory.

Clemson took four shots and had two corner kicks for the game, compared to Duke’s 30 shots and 13 corner kicks. Six fouls were called on the Tigers and four were whistled on the Blue Devils in the game. Freshman goalkeeper Morgan Hert posted eight saves in goal for Clemson in her first start of the season, while Tara Campbell recorded one save in goal for Duke.

“While we had several people play strong games and a few others give us a lift, we must execute better as a team in order to win in the ACC,” said Head Coach Hershey Strosberg. “It’s one thing for young players to gain experience and adjust, but each player needs to understand what is expected and bring that every day. I’m proud of the team and these are difficult lessons to learn, but all are part of the process.

“Our backline did an excellent job in terms of handling Duke’s pressure in attack and Morgan Hert really stepped up when our team needed her. We finally have our full compliment of attacking personalities and are working together more. The response in the second half was good and we created several quality chances while scoring off a set piece to make it 2-1. We’ll get back to work on several things and rest before hitting the road again this week.”

The Tigers will face two teams that are ranked in the top eight nationally on the road this week. Clemson will face #8 Maryland in College Park, MD on Thursday, October 14 at 7:00 PM before traveling to Chestnut Hill, MA to take on #4 Boston College on Sunday, October 17 at 1:00 PM.