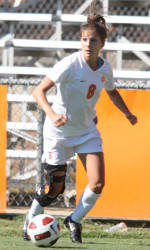 CHESTNUT HILL, MA – The Clemson women’s soccer team fell to 11th-ranked Boston College by a score of 3-1 on Sunday afternoon at the Newton Campus Soccer Field in Chestnut Hill, MA. With the loss, the Tigers fall to 5-10 overall (0-7 ACC), while the Eagles improve to 10-3-1 (3-3 ACC).

The Eagles scored three times, on goals by Victoria DiMartino, Amy Caldwell and Alyssa Pember in the seventh, 24th and 57th minutes, respectively, to take a 3-0 lead. At the 77:59 mark in the second half, senior midfielder Samantha Fortier put the Tigers on the board as she netted her first goal of the season. The native of Wilbraham, MA was playing in just her fifth game of the year, after sitting out the first half of the season with an injury. She was assisted on the goal by sophomore defender Emily Tatum, who tallied her second assist of the year.

For the game, Clemson took five shots and had one corner kick compared to Boston College’s 39 shots and 15 corner kicks. Freshman Lauren Arnold recorded two saves and freshman Morgan Hert posted eight saves, while splitting time in goal for the Tigers, while Jillian Mastroianni tallied one save for the Eagles.

The Tigers will return to Historic Riggs Field on Thursday, October 21 after being on the road for four consecutive matches. Clemson will play host to third-ranked North Carolina in a 7:00 PM contest on Thursday night. The game will be the Tigers’ fifth straight against an opponent ranked in the top 20 in the nation.