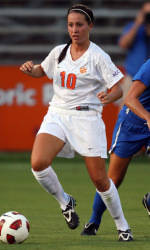 CLEMSON, SC – The Clemson women’s soccer team defeated North Florida by a score of 2-1 on Sunday afternoon at Historic Riggs Field. With the win, the Tigers improve to 5-0 on the season, while the Ospreys fall to 0-5.

Midfielder Sarah Jacobs scored the Tigers’ first goal of the day at the 17:11 mark. The ball was loose in front of the goal when sophomore forward Maddy Elder tapped it to Jacobs outside of the box. The junior sent the ball into the top right corner of the net from 12 yards for her first goal of the season.

Vanessa Laxgang netted her first goal of the season, and of her career, in the 21st minute of play. The freshman midfielder had a one-on-one with the Osprey goalkeeper. Her first shot bounced off the keeper’s hands, but Laxgang got her own rebound and put it into the net to give the Tigers a 2-0 lead.

North Florida put its only goal on the board with less than three minutes to go in the game. Freshman forward Lauren Hopfensperger got behind the Clemson defense and put the ball into the goal on the ground past Tiger keeper Marci Elpers.

“We are excited to be 5-0,” said Head Coach Hershey Strosberg. “It is good for our confidence and is obviously a new feeling for us, which is a great thing. That being said, we are going to be snake bit if we don’t focus on some of the pieces that we need to iron out.

“The goals that we scored early in the game were good combinations, but we had other opportunities that always seemed to be just one pass away or one run away. We need to put together those last little pieces and be able to finish. We have talked about managing the game and being in control of the tempo. We did not do a good job of that in the second half today.

“Overall, we have come together as a team. This group is willing to work hard and is working hard to get better. We have a difficult challenge ahead next weekend when we travel to Columbia for the Carolina’s Cup. Playing on the road against a good, nationally-ranked South Carolina team will be a good challenge for us.”

The Tigers will return to action next weekend as they travel to Columbia, SC to compete in the Carolina’s Cup. Clemson will face in-state rival South Carolina on Friday, September 10 at 7:30 PM and will meet High Point on Sunday, September 12 at 12:00 PM at the Gamecocks’ Eugene E. Stone III Stadium.