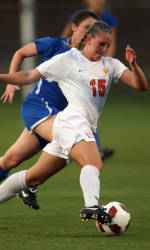 GREENVILLE, SC – The Clemson women’s soccer team defeated Furman by a score of 1-0 at Eugene E. Stone III Stadium in Greenville, SC on Friday night. With the win, the Tigers improve to 4-0, while the Paladins drop to 2-2 with the loss.

The first half of play was scoreless, with Clemson taking eight shots to Furman’s three. The Tigers’ best scoring chance came less than a minute into the game when forwards Jackie Dutton, Maddy Elder and Rachel Hurd outnumbered the Paladin defense in front of the goal. Hurd’s shot didn’t have quite enough on it and Furman’s keeper was able to stop it before it reached the goal.

After nearly 80 scoreless minutes of play, freshman forward Katie Uyenishi took a shot that bounced off a Furman defender. Karg was waiting for the rebound and launched it into the net from the left corner of the box. It was Karg’s second goal of the season and of her career, and Uyenishi’s first assist.

For the game, the Tigers’ took 13 shots to the Paladins’ 15, while Clemson had four corner kicks to Furman’s five. Freshman keeper Lauren Arnold posted two saves and recorded the shutout in goal for the Tigers. Furman keeper Jessica Smith recorded seven saves in the contest.

“It was a hard fought game by both teams,” said Head Coach Hershey Strosberg. “Furman has always been a good program and has presented a challenge for us the past two years. It’s nice to be on the other end of the result.

“It is nice to see our young team persevere. Although we struggled at times, the bottom line is that we got a result. Still, we have to continue to work on understanding the way we want to play and how players can be most successful in their roles. We got a good team effort tonight and I’m pleased with where we are at this point in the season. Now, we have to prepare for Sunday.”

Clemson will be back in action on Sunday, September 5 as they play host to North Florida. The game between the Tigers and the Ospreys is set for 1:00 PM at Historic Riggs Field and will be broadcast live on ClemsonTigers.com via TigerCast.