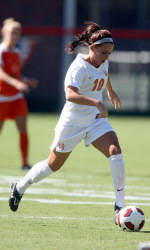 Laxgang netted the Tigers’ first goal less than six minutes into the game. She was assisted on the play by junior midfielder Jackie Dutton also assisted on the goal. Francis Marion evened the score in the 35th minute on a penalty kick goal by Adrienna Osorio-McKenna and the game remained tied at 1-1 heading into halftime.

Laxgang took advantage of a Patriot turnover early in the second half to give the Tigers the lead, which they would not relinquish. An own goal at the 78:20 mark put the score at 3-1 in favor of Clemson and Laxgang tacked on her third goal of the game in the 88th minute to complete the hat trick. Junior defender Ashlynne Bass recorded the assist on the Tigers’ fourth goal of the day. Laxgang actually played a role in all four Clemson goals, as the own goal in the 79th minute was a result of her low lining shot from the top of the box that deflected off a Patriot defender and into the net.

“It is always good to play well and get a result, so we should carry this into our last two games,” said Head Coach Hershey Strosberg. “We created some good chances and should have been able to finish a couple of others but we will take this and keep growing.

“We had several solid individual performances, lead by Vanessa Laxgang’s three goals. We will enjoy this for a bit and then get back to work tomorrow.”

The Tigers will conclude the 2010 season this week as they play host to Virginia Tech and #8 Virginia. Clemson will play host to the Hokies on Thursday, October 28 in a 7:00 PM contest at Historic Riggs Field. On Sunday, October 31, the Tigers will honor seniors Marci Elpers and Samantha Fortier in their final game at Historic Riggs Field against the Cavaliers at 1:00 PM.