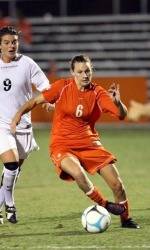 COLUMBIA, SC – The Clemson women’s soccer team defeated Francis Marion by a score of 3-0 on Sunday at the Carolina’s Cup in Columbia, SC. The Tigers improve to 4-1 with the win, while the Patriots fall to 0-5 on the season. Red-shirt sophomore midfielder Jennifer Ficklen, senior defender Molly Johnson and junior midfielder Katie Vogel were named to the All-Tournament Team for Clemson.

Vogel got the Tigers on the board against Francis Marion in the 31st minute with her first goal of the 2008 season. Sophomore Samantha Fortier served the ball from the left side and Vogel was there to finish the play with a 12-yard shot, beating the Patriot goalkeeper to her right.

Clemson’s second goal came on a penalty kick at the 37:14 mark. Junior Danielle Schmitt was able to beat the Francis Marion defense, but was taken down inside the box. Junior Molly Franklin handled the penalty kick for the Tigers and sent it in the net for her first goal of the season.

Forward Tara Cort finished off the scoring for the Tigers in the 71st minute of play. Franklin sent the ball from out wide to Cort, who finished the play by beating the Francis Marion keeper to her right. It was the second goal of the season for the freshman.

For the game, the Tigers took 19 shots, while the Patriots took 7. Clemson had nine corner kicks to Francis Marion’s 0. Sophomore Paula Pritzen played the bulk of the game in goal for the Tigers, recording two saves, while sophomore Marci Elpers finished in goal for Clemson and posted three saves. Emily Brandenburg tallied five saves for the Patriots.

“It’s always nice when you have a tough game like we did on Friday, to turn around and play on Sunday for a shot at redemption and making things right,” said head coach Hershey Strosberg following the game. “We were able to do that today. We scored good goals off of the plays that we created and it was nice to see.”

The Tigers have a week off before they return to Riggs Field to face the defending national champion Southern California. The game between Clemson and the Trojans will be held on Sunday, September 14 at 12:00 p.m.