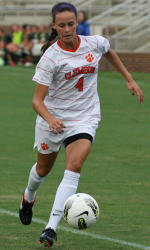 BOONE, NC – The Clemson women’s soccer team defeated Appalachian State on Friday evening by a score of 1-0 in a game that spanned four hours and 42 minutes due to two lightning delays. Freshman Liska Dobberstein scored the game’s lone goal to give the Tigers the win, and improve their record to 4-0 on the season. With the loss, the Mountaineers fall to 1-3.

“It was an interesting challenge tonight with several storm delays,” said Head Coach Lauren Arnold was there tonight when we needed her.

“Playing on the road and playing on turf presents challenges for any team. We were pleased to get the win and I thought Appalachian State competed well. I’d like to thank ASU’s staff for their handling of the delays,” Radwanski added. “They managed the event very well and we were pleased to get the game in. Now, we will take a short time to recover and focus on Sunday’s game against Northeastern.”

The two teams played less than 30 scoreless minutes prior to the first lightning delay, which lasted two hours and 17 minutes. Dobberstein scored five minutes after play had resumed, at the 34:21 mark. The goal, which was the third of Dobberstein’s Clemson career, was assisted by junior Heather Marik.

Play was suspended again in the 59th minute, but this time resumed after just a 32-minute delay. Neither team scored following the second delay, and the game ended as a 1-0 victory for the Tigers.

The Tigers will return home to Historic Riggs Field to play host to Northeastern on Sunday, September 4 at 12:00 PM. The Huskies are coached by Tracey Leone, who was the first head coach in Clemson women’s soccer history. During her six years at the helm of the program, Leone guided the Tigers to six NCAA tournament appearances.

Admission is free to all home Clemson women’s soccer matches.