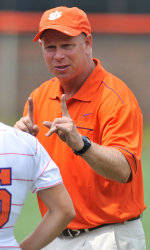 CLEMSON, SC – Head Coach Eddie Radwanski announced the Clemson women’s soccer team’s 2012 schedule on Tuesday afternoon. The Tigers will play 18 games in 2012, nine at home at Historic Riggs Field and nine on the road, and will face 10 teams that played in the 2011 NCAA Tournament. All 10 of those teams won at least one game in the tournament, and eight of the 10 advanced to the Sweet 16.

“We look forward to the 2012 season and another challenging schedule,” said Radwanski. “With three league teams in last year’s College Cup, the ACC continues to show why it is the best women’s soccer conference in the country. There will be a number of exciting home matches at Historic Riggs Field, and Tiger fans will see some great soccer this fall.”

The Tigers will play two exhibition games during the preseason. The team will travel to Cullowhee, NC to face Western Carolina on Tuesday, August 7, and then will play host to Alabama on Saturday, August 11.

On Saturday, September 1, the Tigers will face in-state rival South Carolina in Columbia. Clemson will then play host to Winthrop on Monday, September 3. The team’s final two nonconference contests will be played on the road – at Davidson on Friday, September 7 and at Charlotte on Sunday, September 9.

The Tigers will open the Atlantic Coast Conference season with two road games – at Boston College on Thursday, September 13 and at Maryland on Sunday, September 16. The Eagles and Terrapins both reached the NCAA Sweet 16 in 2011.

The quarterfinal round of the 2012 ACC Championships will be played at the campus sites of the No. 1-4-seeded teams on Sunday, October 28. The conference tournament semifinal and final rounds will be held at WakeMed Soccer Park in Cary, NC for the fifth straight year. The two semifinal games will be played on Friday, November 2 and the tournament will conclude with the title game on Sunday, November 4.