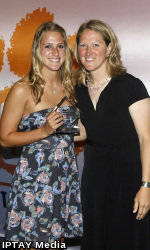 CLEMSON, SC – The Clemson women’s soccer team announced its award winners for the fall 2011 season at its annual awards banquet on Saturday, April 21.

Junior defender Heather Marik was named the Goodman Family Most Valuable Player. Marik started all 18 games for the Tigers in 2011 and played 1,504 minutes, second-most on the team. Despite playing primarily in a defensive role, she also scored two goals and three assists for the year.

Freshman midfielder Katelyn Reeve was the recipient of the Campbell & Friar Family Most Improved Player award. Reeve played in 16 games in 2011, starting nine of the last 12. She scored her first career goal in the Tigers’ final game of the season, a 4-0 win over Francis Marion.

Junior forward Maddy Elder earned the team’s Offensive Player of the Year award, while senior defender Ashlynne Bass was named Defensive Player of the Year. Elder led the Tigers in scoring with eight goals and six assists for 22 points, and has been the team’s leading scorer the past three seasons. Bass started all 18 games on the back line in 2011 and played 1,561 minutes, more than any other player on the team.

Freshman forward Liska Dobberstein took home the Newcomer Award. Dobberstein was named to the ACC All-Freshmen Women’s Soccer Team in 2011 and was the Tigers’ second-leading scorer with six goals and five assists for 17 points on the season.

Senior Sarah Jacobs was named the team’s Most Inspirational Player, an award presented to a player who leads by example on the field, in the classroom and in the weight room, and who has achieved a remarkable consistency of effort while always encouraging others to do the same. Jacobs demonstrated these characteristics to her coaches and teammates through her actions day in and day out.

Senior Rachel Hurd was the winner of the 2011 Coaches Award, an award that recognizes a student of the game who has demonstrated a superior level of dedication and personal accountability to self improvement. Whether putting in extra time on the practice field, reviewing game video or seeking out discussion and feedback, Hurd ways looking to learn and grow as a player, which translated into positive performance in games.

Offensive Player of the YearMaddy Elder

Defensive Player of the YearAshlynne Bass