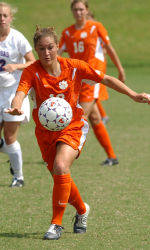 Sarah McClurg was named the recipient of the Coaches’ Award. The Most Improved Player award went to Amber Funk of Greenville, SC. Lydia Vandenbergh was named Lady Tiger of the Year.

Clemson advanced to the NCAA Tournament and finished the season with a 9-9-2 record overall.