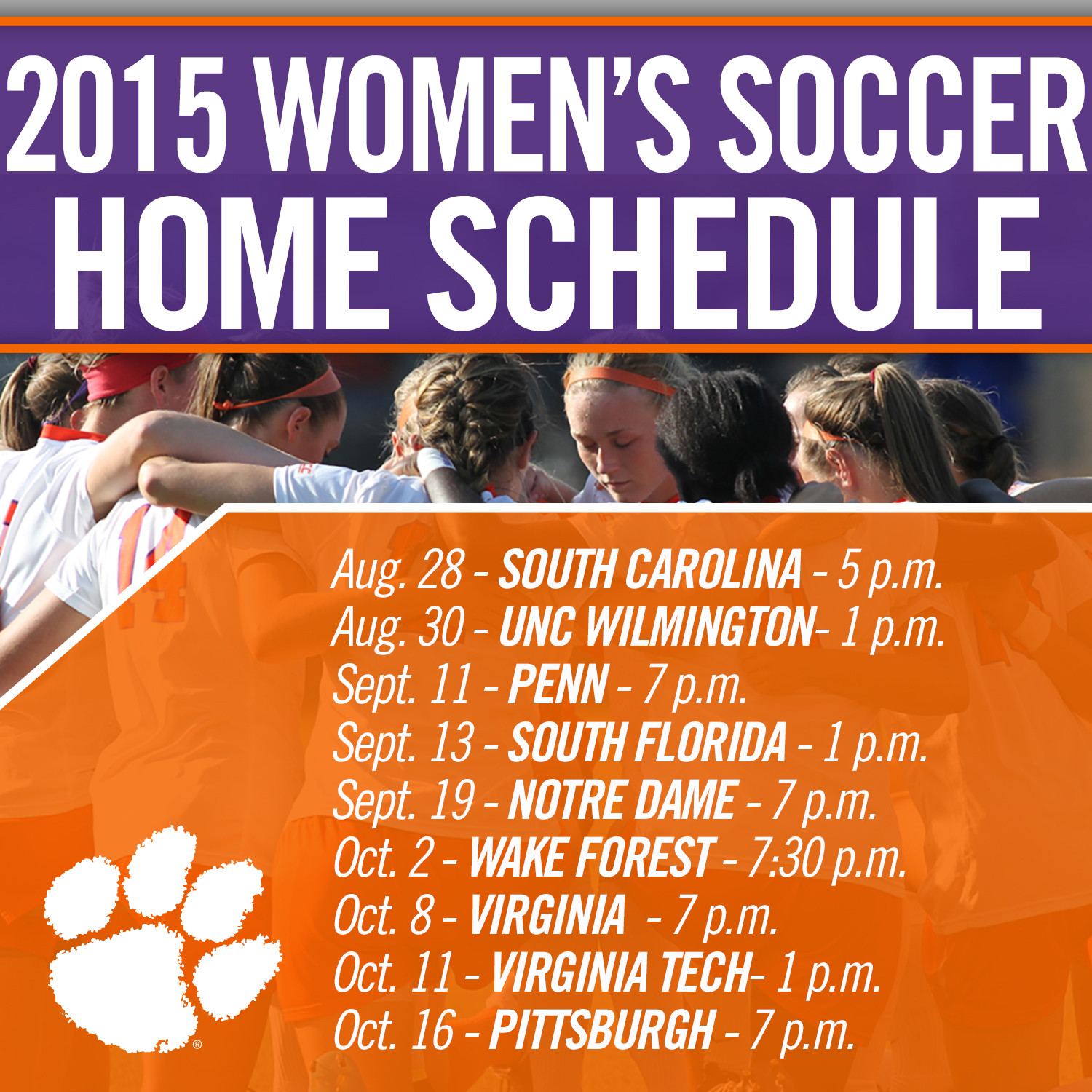 CLEMSON, S.C.  – The Clemson women’s soccer team faces the 2014 National Champion as well as the national runner-up as part of its challenging 2015 schedule, which was announced by fifth-year head coach Eddie Radwanski on Tuesday afternoon. Radwanski, who led the Tigers to the NCAA Tournament last season for the first time in seven years, released the team’s complete 2015 slate, which features eight non-conference matches, 10 Atlantic Coast Conference matches and 10 contests to be played at home at Historic Riggs Field.

In all, the Tigers face nine teams in 2015 that were in the field for the 2014 NCAA Championships. Of those nine opponents, seven won at least one game in the tournament, six reached the Round of 16, three made the quarterfinals and Florida State and Virginia played in the national title match, with the Seminoles taking home the championship.

“This will be the most challenging schedule we have faced since we’ve been here,” noted Radwanski. “We are looking forward to playing some new non-conference opponents. Obviously, a lot of them are NCAA Tournament teams, but it will be nice to get a variety of different looks, opening up with Texas from the Big 12, Georgia who is back on the schedule from the SEC, Penn, a perennial Ivy League power and South Florida, another tournament team. Obviously, everyone will be looking forward to the Clemson-South Carolina game because of our rivalry, as well as last year’s two games, which just go to show how intense it is. That will be an exciting match for our fans to catch.”

Following exhibition contests at home versus Tennessee on Aug. 10 and at Duke on Aug. 15, Clemson opens the 2015 regular season on Friday, Aug. 21 against Texas, a 2014 NCAA tournament participant, in a match that will be played in Charleston, S.C. The Tigers remain in the low country to face College of Charleston on Aug. 23.

After playing the first two games of the season on the road, the team returns home to Historic Riggs Field for five of the next seven games, highlighted by an Aug. 28 date against South Carolina, who advanced to the NCAA Quarterfinals last season. The Tigers and Gamecocks met twice in 2014, with Clemson winning the regular season meeting by a score of 1-0, and, after a 0-0 double-overtime tie, South Carolina advancing on penalty kicks in the first round of the national tournament.

Clemson opens ACC play at home against Notre Dame, a 2014 NCAA Sweet 16 team, on Sept. 19. The Tigers also host Wake Forest, Virginia, Virginia Tech and Pittsburgh in a four-match home stand from Oct. 2 through Oct. 16, and face Florida State, Miami, NC State, North Carolina and Syracuse in conference matches on the road. The away games against the Wolfpack on Oct. 22, the Tar Heels on Oct. 25 and the Orange on Oct. 31 conclude the team’s regular season slate.

When the Tigers host Wake Forest on Friday, Oct. 2, Clemson will celebrate the 100th anniversary of Historic Riggs Field. The evening, which features a double-header with the men’s team, will include ceremonies and presentations to highlight the field’s traditions and rich history.

“The ACC is the top soccer conference in the country, and there are a lot of great, but exciting challenges that come with that,” Radwanski said. “We had a very good season last year and made great strides in moving forward. At this stage, it gets even more difficult to keep moving forward, but we are looking forward to it. We have a strong team returning, but nothing is a given. There are a lot of strong teams in the ACC that can compete for a national championship. Every point will be valuable within the conference. We hope to get off to a good start and take advantage of our home games, and then will have to take care of business on the road. The three road games at the end of the season will likely be very important.

“To top it off, this is a very special year with it being the 100th anniversary of Historic Riggs Field. In the record books, I’ll be the coach that coached the 100th season on Riggs, and to be tied to that Clemson legacy and historical significance is humbling. I know our team is going to be excited for that event, and I know Clemson is going to be excited about it. It’s going to be a special night that fans won’t want to miss.”

For the second year in a row, the ACC Tournament will be a four-team bracket, with semifinals held on Friday, Nov. 6 and the championship match on Sunday, Nov. 8 at WakeMed Soccer Park in Cary, N.C.