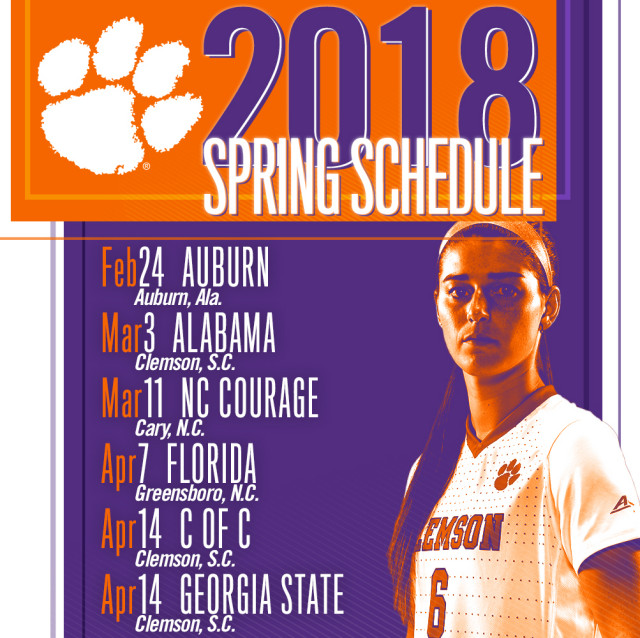 UPDATE (3/10/18): The spring match against the North Carolina Courage at WakeMed Soccer Park in Greensboro will now be played on Saturday, March 10 at 3:30 p.m. The match was originally scheduled for Sunday, March 11, but has been moved up one day due to inclement weather forecasted for Sunday.

CLEMSON S.C. – The 2018 women’s soccer spring schedule features three home matches, three matches against 2017 NCAA Tournament teams, and one against an NWSL team. The six-game schedule begins Feb. 24 on the road against Auburn.

After traveling to Auburn at the end of February, the Tigers host Alabama on March 3 in a 1 p.m. match at Historic Riggs Field. Clemson and Alabama faced off in the first round of the 2017 NCAA Tournament, with the Tigers coming out on top by a final score of 2-1. Clemson is one of four ACC teams that will face the NC Courage this spring, as the two teams are set to meet on March 11 when the Tigers travel to Cary, N.C. for a 2 p.m. match at WakeMed Soccer Park.

Clemson faces Florida at Macpherson Stadium at Bryan Park in Greensboro, N.C. on April 7 at 2:30 p.m. The Gators advanced to the third round of the NCAA Tournament last fall. To conclude the spring, the Tigers host College of Charleston and Georgia State on April 14. It will be a round-robin format with all three schools squaring off at the soccer practice fields on the Clemson campus.

Eddie Radwanski’s Tiger team finished the 2017 season with a 10-5-4 record, earned an NCAA Tournament bid for the fourth consecutive year, and advanced to the second round of the national tournament.

NOTE: College of Charleston and Georgia State will meet on April 14 at 12:45 PM at the Clemson Soccer Practice Fields.