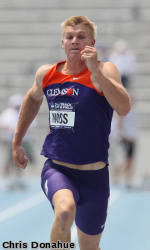 DES MOINES, IA – Clemson qualified for the women’s 4×100 relay final and Miller Moss is atop the decathlon standings after day one to highlight the Tiger track & field program’s efforts Wednesday at the NCAA Outdoor Championships at Drake Stadium. The relay team established a school record, while Moss had his strongest day one on record in the decathlon.

The women’s 4×1 qualified for Saturday’s final (1:03 PM Eastern) with a school-record time in the third semifinal. Clemson’s group posted a time of 43.54, eclipsing the previous school record of 43.62 that had stood since 2001. The team was comprised of Misha Morris and Jasmine Edgerson. This is the second straight year the Tigers will compete in the final with a chance for a national championship in the event. Saturday’s final will be televised live by CBS.

Moss leads the decathlon after half of the events have been completed. The indoor heptathlon national champion picked up where he left off at the NCAA Championships with an impressive day one showing. He tallied 4,271 points, 65 ahead of his closest competitor.

Moss came out strong in the first event of the decathlon. The graduate student out of Sumter, SC used the +2.8 tail wind to his advantage and recorded a personal best, crossing the finish line in a time of 10.58. He saved his best for last in the long jump, hitting a mark of 23’9″ on his final attempt. Moss was solid in the shot put, marking a toss of 44’7″ on his second attempt. In the high jump, he cleared 6’6.25″ on his second try before missing three chances at the next bar. He then finished out his day with a season-best 47.23 in the 400-meter dash.

Clemson did not advance in the men’s 4×100 relay, but did set a season-best with a time of 39.50 after introducing yet another different leg. With Moss entrenched in the decathlon, La’Mont Jackson.

Murdock clocked a time of 10.38 into the wind in his 100 semifinal, finishing 12th out of the 24 competitors Wednesday. He will race again Thursday with the 4×400 relay. With a -2.4 head wind in Fraser’s semifinal, the sophomore struggled to a time of 10.69 in his first individual NCAA appearance.

Sonni Austin competed in the women’s 400 hurdle semifinals on Wednesday. The sophomore out of Decatur, GA produced a time of 58.22, but did not advance to the final. She placed 18th out of 24 participants.

April Sinkler scored a point for the women’s team in the long jump. She finished eighth, her best performance at a national meet in that particular event. Sinkler jumped 21’2.75″ on her second attempt, which ended up just five centimeters short of a fourth-place finish. Jasmine Brunson finished 15th in her first trip to an NCAA national championship meet. The sophomore out of Bermuda produced a top long jump mark of 20’3.75″ on her first attempt of the day.

Day two of the NCAA Outdoor Championships will begin for the Tiger program at 1:00 PM Eastern time with the conclusion of the decathlon. The women’s heptathlon, featuring Liane Weber, will begin at 2:00 PM.