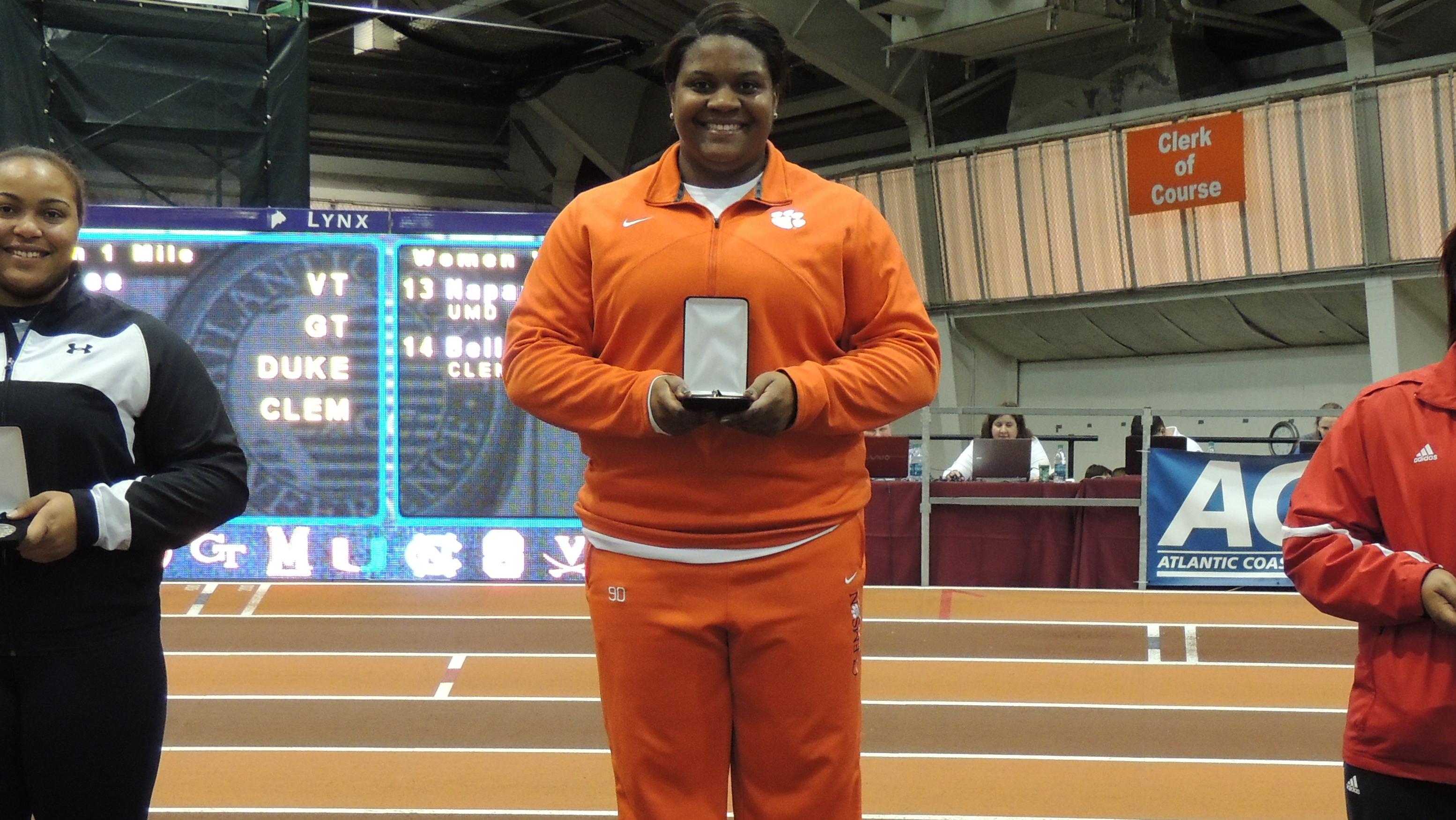 CLEMSON, SC – Clemson senior Brittney Waller earned a bronze medal in the weight throw Friday to lead the Tiger track & field team to a fifth-place tie after day one at the NCAA Indoor Track & Field Championships at the Tyson Track Center in Fayetteville, AR.  Dezerea Bryant added a fifth-place finish in the 200 dash, giving Clemson 10 points for the day.

Waller took the second-best mark into the finals of the weight throw – an effort of 70’9″.  With three additional attempts, the Greenville, SC native and J.L. Mann High School product improved by three centimeters to a distance of 70’10”.  Waller is the third different female to score in the event from Clemson, joining Jamine Moton (2001, 2002) and Della Clark (2007).  All three earned either silver or bronze in the weight.

“Brittney did a great job of battling and coming away with six big points for our team,” said Shawn Cobey, Clemson’s interim director of track & field.  “Overall, it was a productive day for both teams.”

Bryant clocked a time of 23 flat in the 200 final, a personal indoor best for her in the event, to take fifth place.  It ranks No. 2 all-time in Clemson history.  She also qualified for Saturday’s final (8:00 PM ET) in the 60 dash alongside senior Stormy Kendrick.  Bryant ran 7.23 in the second semifinal, while Kendrick checked in with a season-best 7.31.  It was Kendrick’s first time qualifying for the national final in three tries.

Rollins dazzled the crowd in the opening round of the 60 hurdles.  She qualified for her third straight national final in the event with a meet-record time of 7.82 – second-best in NCAA history to her own time of 7.78 from earlier in the season.  Rollins won the event in 2011 and was runner-up last year.  She is scheduled to run the final at 7:20 PM ET on Saturday.

Spencer Adams won his section of the men’s 60 hurdles to qualify for the final.  He ran a time of 7.62 – second-best in the field – and will be in a middle lane for Saturday’s final, which is scheduled for 7:30 PM ET.

In the men’s 60 dash, freshman Tevin Hester qualified for the final – the first Tiger male to do so since Jacoby Ford in 2009.  Hester matched his personal best with a time of 6.64 despite a false start and a second stoppage in his semifinal.  Hester’s final will be held at 8:10 PM ET.

Brunson Miller and Marlena Wesh competed in the 400 semifinals, but did not advance.  Miller, competing in his first-ever NCAA Championships meet, finished 12th with a time of 46.51.  Wesh was 11th in the women’s field with a time of 52.94.  Marcus Maxey also competed Friday, finishing 12th overall in the men’s 60 hurdles with a time of 7.78.

The Tigers return to action Saturday to close out the meet.  Two field event athletes will be in action, Jasmine Brunson in the women’s triple jump and Torian Ware in the men’s high jump.  Ware jumps at 4:30 ET and Brunson at 7:00.  All the action can be followed on ESPN3 starting at 7 PM.