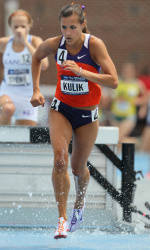 “Our finish was a good compliment to the group,” said Lawrence Johnson, Clemson’s Director of Track & Field. “Our seniors really came through for us. We had some missed assignments this week, but overall it was still a total team effort. The kids came alive the last couple of days and did the things necessary for them to perform at a high level. I’m excited about the future.”

Kulik made the most out of becoming the first Clemson female to qualify for the NCAA Championships in the steeplechase. The junior from Mauldin High School (Simpsonville, SC) produced yet another personal best and school record in the event after crossing the finish line with a time of 9:57.51. Her fourth-place effort was the best finish by a Tiger female in a distance event at the NCAA Outdoor Championships since Mareike Ressing’s fourth-place 3K finish in 1991.

“Alyssa went out and performed like we knew she was capable of performing,” Johnson said. “She’s come along steadily throughout the season. She hit her peak at the right time. Coach (Brad) Herbster did a great job preparing her for this meet. She had a fantastic performance. With the confidence she has gained this year, we expect for her to be a big impact performer for us next season, starting with cross country in the fall.”

Misha Morris and Jasmine Edgerson. In the individual final, Golladay clipped two hurdles within a three-hurdle span that slowed her after an outstanding start to the race. She still managed to post a time of 13.07 in her seventh-place showing, the best finish ever by a Clemson female in the 100 hurdles.

“Shay got off to a great start,” Johnson said. “She hadn’t carried that kind of speed into the hurdles ever before, so she wasn’t able to react quickly enough. But, she turned her career around after we came to the program in 2008. Last year, she wasn’t even in the hurdles final. If there’s one event that’s always loaded, it’s the hurdles. She proved herself to be one of the best.”

The official list of All-Americans from the meet will be released in the next few days by the U.S. Track & Field and Cross Country Coaches Association.