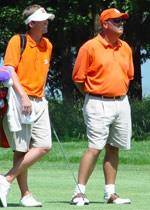 New Haven, CT – Gregg Jones fired a four-under-par 66 and junior Brent Delahoussaye finished fourth individually for the 54-hole tournament, leading Clemson to the championship of the NCAA East Regional at the Yale University Course in New Haven, CT. It was the third consecutive NCAA East Regional Championship for Larry Penley and the Tiger golf team and his seventh overall, an NCAA record. Clemson will now move on to the NCAA National Championship tournament at The Homestead in Hot Springs, VA June 1-4.

Overall, Penley has now won seven NCAA East Regional championships, as he also won in 2000 to go with the aforementioned titles. Clemson won the ACC Championship earlier this year, so this is the second consecutive year Clemson has won the ACC and Regional titles. He now has 56 tournament victories in his 21 years at Clemson. Last year Clemson became the first school in NCAA history to win its conference, regional and national championships in the same year.

Jones had nine-hole scores of 33-33 on the par 70 course, tying his career best round. The round included four birdies, an eagle and two bogeys. He entered the day 51st individually, but his 66 on Saturday moved him to 14th in the final standings. Jones, who graduated from Clemson on May 7, is now the first Clemson golfer in history to finish in the top 15 in four different NCAA East Regional tournaments. He was second last year when he also shot a 66 in the final round. He was 10th as a freshman and 13th as a sophomore.

At last year’s NCAA Tournaments, Penley followed Jones for the entire tournament and the results were successful for Jones and the team. He had not followed Jones this year, but that changed on Saturday. “We talked about it on Friday night after dinner,” said Penley. “I thought it was time to get our postseason going. I asked him if he wanted me to stay with him and he said yes with a big smile. For some reason he always plays better when I am with him. The other players were doing fine so I stayed with him the entire round.”

Jones felt the reason for his outstanding round was his driving accuracy and his practice. “I drove it poorly the first two rounds and you can’t do that on this course,” said Jones. “I had been putting pretty well this week and I continued that today, but the big difference was hitting the fairways. I also had a good practice yesterday after the round and that confidence carried over to today’s round. I didn’t practice well before the first two rounds.

“The eagle on the 16th hole (his seventh of the day) was big. It was a 50-foot putt that I was just trying to get close for an easy birdie, but it went in. I haven’t had a lot of those this spring.”

While Jones was the leader on Saturday, Delahoussaye was Clemson’s top player of the tournament. The transfer from South Carolina had a one-under-par 69 on Saturday to finish with a 54-hole score of 211, one-over-par. He was just four shots off the pace of individual champion Bill Haas of Wake Forest. Delahoussaye had four birdies and three bogeys on the day to finish three strokes better than any of his Clemson teammates for the tournament. The fourth-place individual finish was his career best as a collegian. It was his second top 20 at NCAA Regional play, as he had finished 19th while playing for South Carolina at the 2001 West Regional.

“Brent Delahoussaye is the reason we won this tournament,” said Penley. “He didn’t even know he was playing until the day before we left. He was fantastic. He struggled the last couple of holes yesterday, but he didn’t let it carry over to today. He was consistently in the fairway on his drives and that was a key to his game.” Delahoussaye was inserted into the lineup on Monday after Brian Duncan suffered an injured thumb last week.

Matt Hendrix showed steady improvement throughout the tournament as his scores improved from 74 to 72 to a final round 70. He had two birdies and two bogeys on his card on Saturday. At one stretch he made 14 consecutive pars. Hendrix finished 23rd overall. Sophomore Stephen Poole double bogeyed the ninth hole, his final hole of the day, but still shot a 72 and finished 30th overall. Jack Ferguson shot his third straight 74, an accomplishment considering he had two double bogeys within his first three holes.

“This was a big win for us because we showed we could come back,” said Penley. “We were in fourth place four shots out entering today’s final round, but turned it on when we had to. It was a perfect day for scoring and we were able to take it low compared to the other teams.” Clemson’s 277 team score on Saturday was the only under-par team round of the tournament.

“This was a good course for us to prepare for the national championships because it is very similar to the Homestead. It think it will help all the teams that advance from the East when we get to The Homestead on June 1. You have to be crafty to be successful at the Yale Course. You have to manage your game and that is the same approach at The Homestead.”