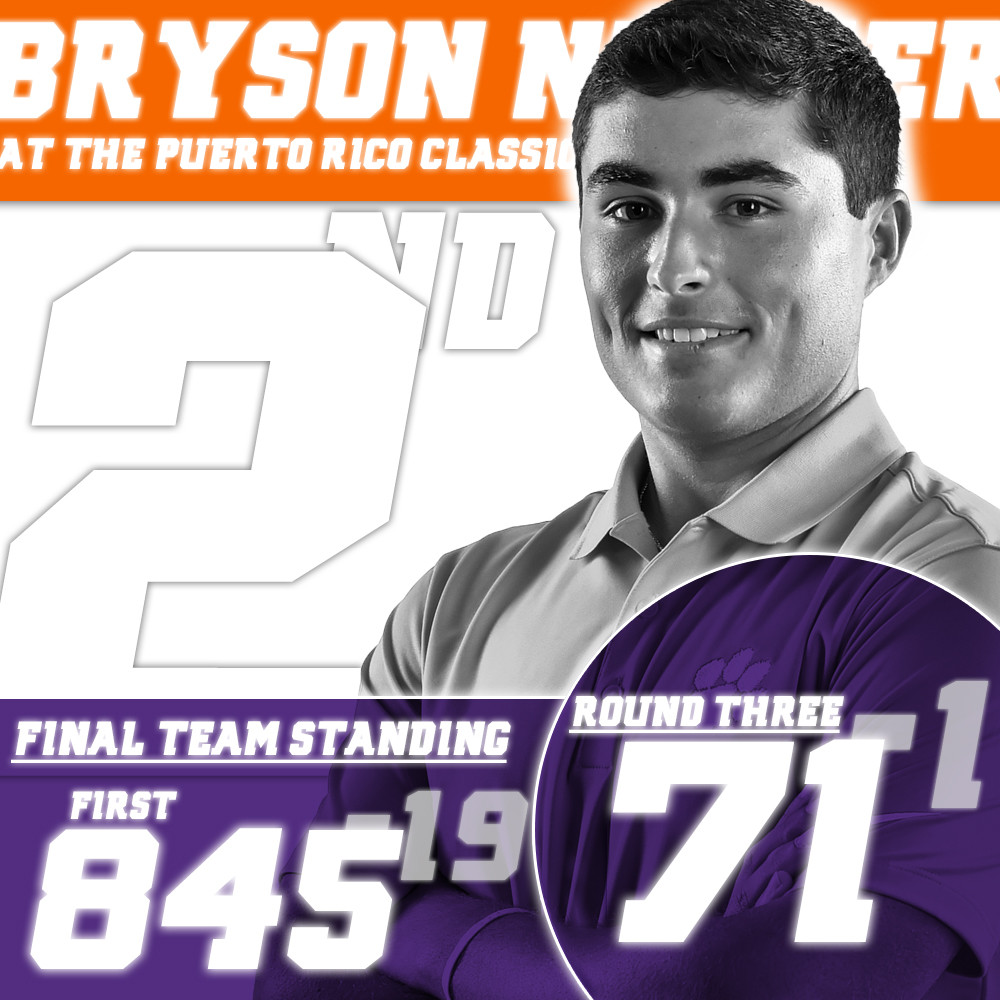 Clemson S.C.-Bryson Nimmer, Doc Redman and Carson Young all had final round scores of one-under-par 71 to finish in the top 10 individually and lead Clemson to the championship of the Puerto Rico Classic on Tuesday.   The Tigers won the 15-team event at Rio Mar Country Club by 11 shots over Georgia.

It was Clemson’s second consecutive tournament championship, third this academic year and sixth in the last two years. The victory was the 71st for Head Coach Larry Penley in his 34 years as Clemson Head Coach, second in ACC history.

This was just the second Puerto Rico Classic championship in 25 appearances for the Tigers. Clemson had finished second nine previous tournaments, but this was the first win there since 1999 when current PGA Tour players Lucas Glover and Jonathan Byrd were on the team.

It marked the second consecutive tournament Clemson had defeated Georgia. In the final tournament of the fall Clemson overcame a 12-shot deficit to the Bulldogs entering the final round to win the Ka’anapali Classic in Hawaii.

Nimmer had rounds of 69-67-71 for a 207 total in finishing in second place behind Georgia Tech’s Luke Schniederjans, who had a 206 figure. Nimmer had 15 birdies in the 54-hole tournament to lead the Tigers in that category. It was Nimmer’s third top 10 finish of the season.

Redman finished in a tie for fifth with a 212 total for 54 holes after scores of 72-69-71. He finished with 10 birdies for the three rounds. The freshman from North Carolina now has 11 under-par rounds and six rounds in the 60s.

Carson Young shot a one-under-par 71 in all three rounds to finish in a tie for seventh place with a 213 score. The senior from Pendleton had 13 birdies for the tournament. He now has 25 career under-par rounds. This was his fifth top 25 finish of the year, but his first in the top 10.

Austin Langdale struggled in the first round with a non-counting 79, but he played the last 36 holes at three-under-par, including an even par 72 on Tuesday. He had 14 birdies for the 54 holes, second on the team. He finished with a 220 score, tied for 32nd.

Josh Fickes shot a 74 on Tuesday to finish with a 222 total, good enough for 40th place.

Peter Mathison and William Nottingham played in the Puerto Rico Classic Individual Tournament on a different course and played well. Mathison finished second among the 10 individuals with a 216 score, while Nottingham was third at 219.

Clemson returns to action March 6-7 at the Palmetto Intercollegiate at Palmetto Golf Club in Aiken, S.C.