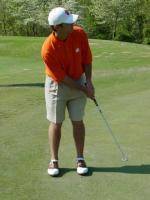 Jack Ferguson culminated one of the greatest comebacks in Clemson golf history with a birdie on the final hole, giving #1 ranked Clemson its eighth ACC golf Championship. The 50th ACC Tournament was completed Sunday at the Old North State Club in New London, NC.

Clemson overcame a five-stroke Wake Forest advantage heading into the final round. It was the largest Clemson deficit entering a final round overcome to gain victory since the 1998-99 season when Clemson won the Chris Schenkel Invitational in Statesboro, GA after trailing Georgia by five shots entering the final round.

The heroics of Matt Hendrix and Ben Duncan also scored birdies on the par five final hole to key the Clemson victory.

“I don’t know how we did this,” said Penley, who won the ACC Championship for the seventh time in his Clemson coaching career. “We played steady on 16 and 17, much better than yesterday when he made bogeys on those two holes. Then, we made some shots on 18 and Wake Forest came back to us.”

With Clemson and Wake Forest and the final groups approaching the green, Penley informed Ferguson, a sophomore from Seneca, of the situation. “I told him we needed a birdie to win the tournament, but a two-putt would give us a co-championship. I basically wanted him to make the putt, but just dribble it in. He looked at me and said, ‘Don’t worry coach, center-cut.”

That is just what Ferguson did with the eight-foot up-hill putt, giving him a score of 70 for the day and a one-stroke team victory for the Tigers, Clemson’s first ACC team title since 2000. Ferguson finished the tournament with a 214 total after rounds of 72-72-70. He and individual medallist Richard Treis of North Carolina were the only two competitors to shoot par or better all three rounds of the event. Ferguson now has a streak of 12 consecutive rounds of par or better.

While Ferguson will get many of the headlines, he was not Clemson’s low competitor on Sunday. Matt Hendrix, a junior from Aiken, SC, fired a 68 on Sunday and finished seventh overall with a 217 score. He was consistent with nine hole scores of 34 and his birdie on the 18th gave Clemson considerable momentum because he was the first Tiger to finish.

D.J. Trahan had 17 pars and one bogey and shot a 73 on Sunday. His 218 total was good enough for ninth place, his third career top 10 finish at the ACC Tournament. It was the second time Trahan had played on a Clemson ACC Championships team, as he was a starter on the 2000 Clemson team that featured current PGA Tour professional Jonathan Byrd.

Senior Ben Duncan had a final round 74 and finished with a 221 score, good enough for 14th. It was his second straight top 15 finish at the ACC Tournament. “Ben’s performance was huge,” said Penley. “His birdie on 18 was big, but he stayed in the game all day. He played the last 14 holes at one under par.”

Junior Gregg Jones had a final round 78 and his score did not count towards Clemson’s team total on Sunday. But, he was a counter on Friday and Saturday with scores of 74 and 73, respectively. All five Clemson golfers finished in the top 20 of the individual race, the first time in the 50 years of the tournament that all five Clemson golfers had top 20 finishes.

The victory was the fourth tournament victory for Clemson this year, one short of the single season school record. The Tigers won three events in the fall. The finish also gives Clemson 15 consecutive top three tournament finishes, a school record. Clemson’s next tournament will be May 8-9 at the Atlanta Intercollegiate. The NCAA East Regional is May 15-17 at the University Course in Auburn, AL.