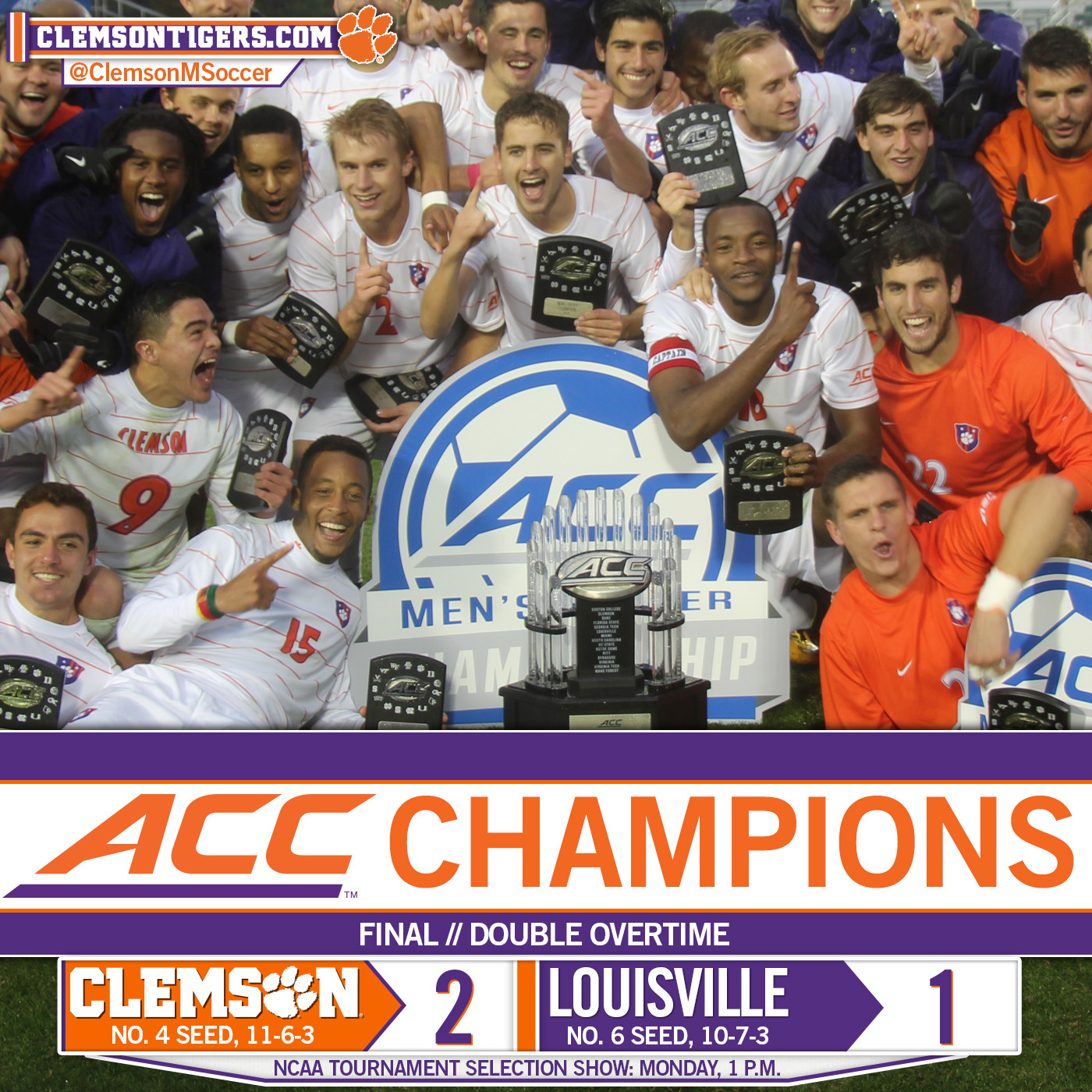 The Clemson men’s soccer team won their 14th ACC Tournament title on Sunday, Nov. 16 at WakeMed Soccer Park in Cary, N.C. The Tigers knocked off sixth-seeded Louisville 2-1 in double overtime off a goal from senior and Clemson native Ara Amirkhanian. The championship is Clemson’s first since 2001. The Tigers improve to 11-6-3 on the season.

Amirkhanian, one of six Clemson players named to the All-Tournament Team, scored in the 104th minute, his second goal of the season. JuniorKyle Fisher and freshman Diego Campos assisted on the goal off the corner kick.

Junior Paul Clowes, who was named Tournament MVP, scored the equalizer in the last three seconds of regulation to send the game to overtime. The thrilling score came off assists from freshman Michael Melvin and sophomoreAlex Happi. Clowes booted the ball from the top of the box into the lower left corner of the goal, his first score of the season.

“As a team, we always believe that we can win games,” Clowes said. “We are determined and we show right until the end. With our team a lot of time the goal scorer is coincidental, and today it was my turn.”

“This team is probably made up some of the greatest character young men that I’ve been associated with as a head coach for 27 years and that came through again today,” head coach Mike Noonan said.

Clemson improves to 3-3-0 all-time in ACC Tournament finals. The match was the eighth overtime match of the season for the Tigers, and the third in a row. The team has a 3-2-3 record in overtime games this season.

Tarbell played a full game in goal, saving two shots en route to his eighth win of the season. As a team, Clemson out-shot Louisville nine to five. The Tigers took five corner kicks to Louisville’s one.

With the tournament title, Clemson is now assured of a berth in the NCAA Tournament. The tournament selection show will be broadcast live at 1 p.m. on Monday, Nov. 17 on NCAA.com. Updates will be posted to @ClemsonMSoccer on Twitter and ClemsonTigers.com as soon as they become available.