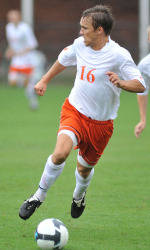 CLEMSON, SC – The Clemson men’s soccer team will play Virginia Tech on Tuesday, November 10, at 1:00 p.m. in the opening match of the 23rd Annual ACC Men’s Soccer Championship at the WakeMed Soccer Park in Cary, NC.

This will be eighth meeting between the two schools on the soccer field. Virginia Tech leads the overall series 3-2-2. The two schools have never met in ACC Tournament play.

The winner of this match will play the #1 seed Wake Forest on Wednesday at 5:30 p.m.

Clemson is led in scoring by Nathan Thornton and Joseph Bendik has 75 saves this season and a 1.38 goals allowed average in goal for the Tigers.

Virginia Tech is led in scoring by Emmanuel Akogyeram and Charlie Campbell as both players have 10 points. Akogyeram has four goals and two assists this season. Charlie Campbell has three goals and four assists. Brendan Dunn is in goal for the Hokies, and he had 42 saves and a 1.56 goals allowed average.