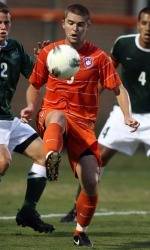 Clemson Will Play Host to Gardner-Webb and Virginia this Week

CLEMSON, SC – The Clemson men’s soccer team will play host to Gardner-Webb on Tuesday and Virginia on Friday at Historic Riggs Field. The Gardner-Webb match will start at 7:00 p.m. and Virginia will also be a 7:00 p.m. start. The Virginia match was originally scheduled to start at 6:00 p.m., but was changed to accommodate television. Fox Sports South will carry the game live as part of the ACC Soccer Television package.

Tuesday’s match against Gardner-Webb will be broadcast live on ClemsonTigers.com via TigerCast, and can be seen at the link below.

Clemson has a 2-4 record overall and a 1-2 mark in the ACC. The Tigers are coming off a 2-1 overtime win over N.C. State in Raleigh last Friday night. Bryniar Benediktsson scored with only :29 seconds remaining in the second overtime period to give the Tigers the victory. Benekiktsson’s goal was Clemson’s seventh latest goal to win a game against time constraints. It was also the latest goal scored ever by a Clemson player in overtime against time constraints to claim the victory.

The Tigers are led in scoring by Austin Savage with three goals and one assist for seven points. Benediktsson has two goals and two assists for six points.

Gardner-Webb has a 3-4-2 record overall this season. John Sargent leads the Runnin’ Bulldogs with three goals this season. Chris Davis also had two goals and two assists for six points.

Youth Soccer Month is designed to raise awareness of Youth Soccer and the benefits of playing the game. It is also used to emphasize soccer as the number one youth participation sport in America and a leading contributor to the healthy lifestyle of millions of American families.

Youth soccer month bring kids and families of all ages and all abilities together for fun, friendship and fitness. And it also highlight the various programs available to children interested in participating in soccer, including inner-city, special needs, recreational and elite soccer programs.