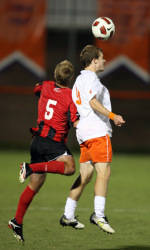 Clemson is the seventh-seed in the tournament, while Maryland is the second seed. The winner of this match will face the winner of the Wake Forest-Virginia match on Friday evening at 5:30 p.m. in the quarterfinal round.

Clemson has a 5-8-4 record overall and finished 2-4-2 in the ACC. The Tigers are led in scoring by Tommy Drake with five goals and four assists for 14 points. K.C. Onyeador has five goals and two assists for 12 points. Onyeador has been named ACC Player of the Week on two occasions this season. In goal, Cody Mizell has a 1.10 goals allowed average along with 62 saves.

The Tigers played Maryland on October 16, in College Park, MD, with the Terrapins winning 3-2. Tommy Drake were the scorers for Clemson in this match.

Maryland has a 14-2-1 record overall and a 7-1-1 mark in league play. Matt Kassel leads the Terrapins in scoring with seven goals and nine assists for 23 points. Jason Herrick has eight goals and five assists for 21 points. In goal, Zac MacMatch has a 0.64 goals allowed average along with 47 saves this season. The Terrapins are ranked third nationally in the latest soccer polls.

This will be the 51st meeting between Clemson and Maryland on the soccer field. The Tigers lead the overall series 30-19-1. In the ACC Tournament, both teams have met six times with each team winning three matches.