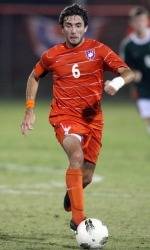 CLEMSON, SC – The Clemson Men’s Soccer team will play host to number-one ranked Maryland at 7:00 p.m. on Friday night at Historic Riggs Field. This will be the last home match of the season.

Clemson is 5-8-1 overall, and 2-4 in conference play. Bryniar Benediktsson leads the Tigers with six goals and three assists for 15 points. Austin Savage scored the tying goal against East Tennessee on Monday, October 24 in the Tigers 1-1 draw with the Bucs. This was his fifth goal of the season.

Maryland is ranked number one in the nation by the latest polls. The Terrapins are 13-1-2 overall and 4-1-1 in the conference. The Terrapins are coming off of a tie against second-ranked North Carolina. Casey Townsend and John Stertzer lead Maryland with 12 goals apiece.

This will be the 62nd meeting between the two teams on the soccer field. Clemson leads the series 30-20-1. Maryland has won the last three meetings. All three games had a one-goal differential.

Clemson’s Keegan Priest will be honored for his accomplishments over his career during the game. He is the lone Tiger that is making his last home appearance. Priest has played in 61 games during his career and started 28. He has scored two goals and has accounted for nine assists for 13 points. He is currently working on his masters of business administration degree.

As an added feature the ever-popular scarves and t-shirts will be given away at halftime. Also winners of the Clemson United Student Promotion will be announced. Also there will be a Halloween Costume Contest for students with the winners receiving Gift Cards from area stores and merchants.