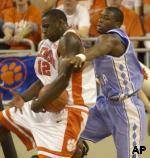 *Clemson overcame a five-point halftime deficit in winning today’s game. It is just the fourth time since the 1951-52 season that Clemson has overcome a halftime deficit to beat North Carolina. Larry Shyatt has now coached Clemson in two of those four victories. Clemson overcame a five-point deficit (35-30) to beat a #1 ranked North Carolina two years ago.

*Clemson player Jermel Douglas, a fifth-year senior, has been on the roster for all three of Clemson’s wins the last five years against North Carolina. He did not play in today’s game, but is the first Clemson player to be on the roster of three Clemson teams to defeat North Carolina since Bobby Conrad (1977-80). Conrad was present at today’s game. He is a fifth year senior who red-shirted the 1999-00 season.

*Scott scored 46 points in the two games this week. It is the second time in his career he has had consecutive 20-point scoring games. He played all 40 minutes today, ninth complete game this year and 16th of his career. He has played at least 38 minutes in all but four games and 10 games in a row.

*Scott needs just five rebounds to become the ninth player in ACC history to accumulate 1000 points, 500 assists and 400 rebounds in a career.

*Tomas Nagys shot the ball 11 times today and it went through the hoop 11 times. He as 3-3 from the field and 8-8 from the foul line. His 15 points were his high for the season and four off his career high. His 8-8 free throws tied for Clemson’s highest perfect free throw shooting game this year. Ed Scott hit 8-8 in the South Carolina game earlier this week.

*Clemson shot 54.9 percent from the field as a team, including 10-13 from its four post players. The post players were 16-24 in the first game between Clemson and North Carolina. Clemson’s overall 54.9 field goal percentage was its best since connecting on .554 against Virginia on Jan. 18.

*This was the most points Clemson has scored in a victory over North Carolina since an 85-82 win over the Tar Heels during the 1988-89 season. Clemson did score 81 points in an 18-point loss to North Carolina in the ACC Tournament in 2000-01.