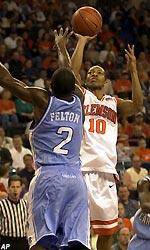 CLEMSON, S.C. – Edward Scott scored 18 of his 25 points in the second half as Clemson beat North Carolina 80-77 Saturday.

The Tar Heels (13-11, 4-7 Atlantic Coast Conference) had a chance to tie after Scott missed a free throw with 7.5 seconds to go, but Raymond Felton’s double-clutch 3-pointer hit the front of the rim as the clock wound down.

Thomas Nagys free throws with 51.3 seconds gave Clemson (13-8, 3-7 ACC) the lead for good. The senior scored 15 points on 3-of-3 shooting from the field and hit all eight of his free throws.

But Clemson’s defense made the difference in the end. After Manuel buried a 3-pointer in the corner with 3:51 to go, the Tar Heels managed just three free throws, missing three shots and turning the ball over with a chance to tie with 33 seconds to go, then not fouling until the clock wound down to 7.5 seconds.

Meanwhile Olu Babalola, who finished with 11 points and eight rebounds, hit two shots during the same stretch and was credited with the late steal even though the ball bounced off Nagys’ face.

The game vaults the Tigers half-a-game out of last place in the ACC and greatly enhances their postseason chances. The 80 points were the most by Clemson since beating Coastal Carolina 90-63 on Dec. 31.

The loss sends North Carolina just a game from the bottom of the league. The Tar Heels, who beat Kansas and Connecticut earlier in the season and had an RPI of 34 starting this week, must win four of their last five ACC games to finish even in the conference.

Clemson had a distinct size advantage, but it didn’t show in the first half, when North Carolina pulled down 14 offensive boards, compared to six for the Tigers.

But the Clemson big men clamped down on the boards after the break, outrebounding the Tar Heels 23-7 in the second half.

Manuel hit the first shot of the half to give North Carolina a 39-32 lead, but Scott would go 5-of-7 and score 11 points in the next eight minutes to pull thee Tigers back in the game.