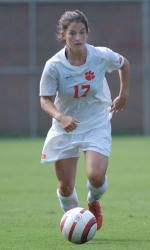 CLEMSON, SC-Courtney Foster scored the game’s only goal in leading Clemson to a 1-0 upset win over sixth-ranked Duke at Clemson, SC Thursday night.

Clemson has now defeated Duke in the last seven meetings between the two schools dating back to the 2000 season. Duke has not defeated the Lady Tigers at Clemson since the 1997 season.

Clemson’s Britten Meyer served a long pass to Foster, setting up a one-on-one situation with Duke goalkeeper Allison Lipsher. Foster sent an eight-yard diagonal shot into the left corner of the net for her second goal of the year.

Duke had a chance to even the score at the 54:33 mark. Darby Kroyer missed a penalty kick after Carmen Bognanno was brought down by Clemson’s Amber Funk in the box. Kroyer’s shot from the mark went wide left. This was the 14th top 25 team that Clemson Head Coach Todd Bramble has defeated. The win over eighth-ranked Duke is the fourth highest ranked team that Clemson has defeated under Bramble. This season, Clemson defeated 12th-ranked Wake Forest last Sunday.

“We are playing our best soccer,” said Clemson’s goalkeeper Ashley Phillips who finished the night with seven saves. “We played hard and we were determined not to let them score.”

“I received a great ball from Britten Meyer,” said Clemson’s Courtney Foster. “I ran on to the ball and had one touch and then I released the shot. It felt good to score.”

“We continue to play well,”said Clemson Head Coach Todd Bramble. “The results are starting to go our way. Tonight’s win is a product of a young team working hard, getting to know each other, and coming together at the right time. I am real pleased with the way we came into this game. We executed our game plan well. Our freshmen are not playing like freshmen anymore. If I had to single out two players from tonight’s match it would by Ashley Phillips for playing an excellent game in goal. It was a great team effort.”