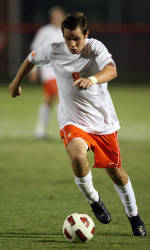 In the first half, both teams had stubborn defenses as Clemson took four shots while Duke took only two.

The Blue Devils had a serious threat in the 27th minute as Andrew Wenger took a diagonal shot from 12 yards out that hit the cross bar and was cleared by the Clemson defense.

Clemson scored first with only :59 seconds remaining in the first half. Tommy Drake sent a corner kick in the box. K.C. Onyeador with his back to the goal curled to his right and sent a diagonal shot to the right corner of the goal for his third of the season.

Early in the second half, Clemson’s Drake was in a one on one situation with Duke’s goalkeeper James Belshaw. Drake sent a 10 yards shot to the goal but it was saved by Belshaw, but he couldn’t control the shot. The ball went to the Tigers’ Nick Burton who attempted a shot but it went over the goal.

Midway in the second half, Duke’s Cole Grossman sent a pass to Sebastien Ibegha. Ibegha tried a header from eight yards out that went over the goal.

In the final 10 minutes of regulation, The Blue Devils attempted seven shots including the tying goal.

In the 80th minute, Duke’s Andrew Wenger tried a header from six yards out but the ball went over the cross bar.

Duke attempted another shot in the 81st minute as Ryan Finley rifled a 30-yard shot toward the middle of the goal that was saved by the Tigers’ Cody Mizell.

In the 83rd minute, Duke’s Andrew Wenger fired a 24-yard shot, but Mizell knocked the attempt over the goal. In the 84th minute Wenger attempted a six-yard header that went over the goal.

Duke evened the score with 5:51 left to go in regulation. Cole Grossman played the ball from the middle to the center of the box. Finley took the pass and sent a 10-yard shot to the right center of the goal for his 13th tally this season.

Sumpter scored the game winner at the 96:14 mark. Stephen McGill at the top of the box. McGill laid the ball with his left foot to Sumpter who first stepped a shot from 18 yards out to the right corner of the goal for his fourth goal of the season.

“It’s a great feeling,” said Clemson’s Riley Sumpter who scored his second career game winner. “We worked hard, and we were not going to let this game get away from us. I am so happy for our team.”

“I’m happy for the team and Clemson University,” said Clemson Head Coach Mike Noonan. “We played the game like a young team would. We had the lead late in the game and we starting sitting back and they applied the pressure. As a coach you sit there with a helpless feeling. However, this team will not give up. They fight and they are no longer afraid to compete. I am happy with the way we defended and we were very solid in midfield. I couldn’t be happier.

“Our goakeeper, Cody Mizell is a freshman, but he plays like a junior or senior,” said Noonan. “He is very composed, and I am proud of Cody.”

The Tigers will play host to Wofford on Wednesday, October 27, in the Tigers next action.