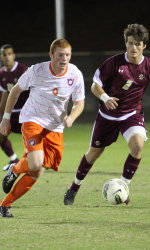 CLEMSON, SC – Freshman Iain Smith scored one goal and had an assist in leading Clemson to a 2-0 upset win over 14th-ranked Boston College at Historic Riggs Field in Clemson, SC Friday night.

Two oddities occurred in this match. With only one second left in regulation, Iain Smith scored his first goal of the year (89:59). This tied the Clemson record for the latest goal scored in regulation in school history. Jimmy Glenn scored with one second remaining in the Tigers’ 2-1 upset-win at number-one ranked Virginia in Charlottesville, VA on October 10, 1993. The other strange oddity is the Tigers’ goalkeeper, Cody Mizell had an assist on the play.

The Tigers scored first as Amadou Dia scored for the Tigers at the 26:59 mark. Brynjar Benediktsson played the ball from the middle to Iain Smith. Smith crossed the ball to Dia who fired a shot into the netting for his third goal of the year.

Smith scored his last-second goal (89:59) with an assist by the Tigers’ goalkeeper Mizell. Mizell punted the ball to the left creating a one-on-one situation for Smith and Boston College’s goalkeeper Justin Luthy. Smith fired a diagonal shot to the right wall of the netting from 18 yards out beating Luthy to his left for his first goal of the season.

Clemson’s Mizell had a season-high 10 saves in the match. Boston College had 19 shots compared to Clemson’s seven. The Eagles had seven corner kicks compared to the Tigers’ three.

“Its great to get the win,” said Mizell. “Our defense played great. I give the credit to our back four. They really played great together tonight. They blocked a lot of shots and crosses in the match.”

“Any ACC win is special,” said Clemson Head Coach Riley Sumpter also did great in the back. We will enjoy the win, and then prepare for our match with Furman,” said Noonan.

Clemson will play host to Furman on Tuesday, October 18, at 7:00 p.m. in the Tigers’ next action.